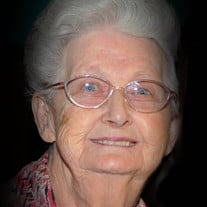 Alberta Louise Holm, age 86, of Butte Montana and of Anaconda Montana passed away peacefully with her loving family at her side on May 26, 2017 at St. James Community Hospital. She was mother, a grandmother, a wife, and a friend. Throughout her life, Alberta Holm fulfilled these many roles and more. To her numerous grandchildren, she was Grandma Berta and to her beloved Aunt Frances she was Birdy. Alberta was born New Year's Day 1931 in Albuquerque, New Mexico, the first child of Jack and Ruby (Ward) Armstrong. She was raised by her Grandmother Lydia Louise Bennet alongside her best friend and aunt, Francis Hooker, for the first 7 years of her life. Alberta was a dedicated and hard worker. She worked as a cardiac technician at Silver Bow General Hospital for 26 years and at St. James Hospital for another 26 years. She married Gerald Holm in Butte on April 30, 1976 and he passed away February 18, 2005. She is also preceded in death by her parents, her sons: David Martinez and Richard Martinez, her granddaughter: Marissa Martinez; her grandsons: T. J. Holm and Chad Richards, her brothers: Robert Barker and Benjamin Golden, her sister, Edith Kopp and her aunt, Frances Hooker. Survivors include her sons and daughters and their spouses: Sharon Martinez, Dennis Martinez, Onie Martinez (daughter-n-law) of Albuquerque; NM, Paulette Macintyre of Missoula, MT; Roger Reveles of Billings, MT; Emelia and Dave McEwen of Butte, MT; Margie and Rich McEwen of Helena, MT; Greg Reveles, Danny Reveles of Seattle, WA; and Debbie Mason of Butte, MT. She also is survived by 24 grandchildren and 46 great grandchildren, and many nieces and nephews and their families. What a legacy! Also included are Gerald’s children: Jerry Jr. and family; Rod and family; Bob and family; Craig; Jeff (deceased) Pam and family, Jeff; Judy and family, Shaun and family, Jill and family, Debbie and family, Erin and family. Alberta was known for her feisty, yet caregiving nature. She loved fishing, camping, lunch at the Belmont, her many friends especially her dear friend, Carol, and her pets. Most of all she loved her huge family with all her heart. She will be missed by all who knew and loved her. In lieu of flowers, donations can be made to Harvest Butte Campus Church or Belmont Senior Citizens Center or charity of your choice in her honor.

Alberta Louise Holm, age 86, of Butte Montana and of Anaconda Montana passed away peacefully with her loving family at her side on May 26, 2017 at St. James Community Hospital. She was mother, a grandmother, a wife, and a friend. Throughout... View Obituary & Service Information

The family of Alberta Louise Holm created this Life Tributes page to make it easy to share your memories.

Alberta Louise Holm, age 86, of Butte Montana and of Anaconda...

Send flowers to the Holm family.