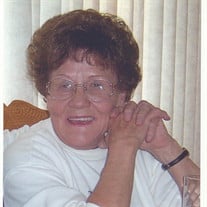 Our beloved Mother and Nana Alpha Aguirre-Pericich went peacefully "home" on March 28th in her daughters home, surrounded by her family. Alpha was born February 7, 1929 the seventh of ten children in Garrison, North Dakota. She was raised on a farm and always told stories about her life and chores as a kid on a farm. At 18 years of age she moved to Montana to assist her sister Alvina and babysit her kids. Alpha met and married Bob Aguirre and together they had four children. Alpha took a job as a cook at Lydia's Supper Club where she worked long hours into the morning, then returned home to raise and care for her family. Alpha and Bob opened and ran a little neighborhood grocery store they named A&B Grocery. After several years Bob and Alpha divorced. With all her children grown, she took a job at the War Bonnet Inn as a housekeeper. She later met her soul mate, Walter Pericich and they were married on June 22, 1985 in St. John's Catholic Church. Our Mom and Nana will be remembered for many different characteristics. All would agree "hard working" would be the word all of her family would use to describe her. Even on days when she felt her worst you could find her on her hands and knees scrubbing the floor or standing on a ladder to clean the top shelving or ceiling fan. "Loving" is another word to describe our Mom (Nana). She loved her children, grandchildren, great grandchildren and her one great-great-grandchild more than life itself and would do anything for them she could. When she finished her official working career she gladly took on the task of babysitting all of her grandchildren. All of her grandchildren were blessed to have spent so much time with her and will always treasure the wonderful memories they will carry with them the rest of their lives. In the past few weeks when Mom was very sick every grandchild that stopped to see her had a special remembrance of Nana that they shared and they were all very eager to help Nana out now when she needed it. She was very lucky to have two granddaughters (Angie and Judy) that are nurses and a grandson (Cameron) that will be a nurse that could help her on a daily basis. Even though some days Nana couldn't respond it was pretty evident that she knew the grandkids were around and appreciated their visits and everything they all did for her. Alpha was preceded in death by her parents, her husband Walt Pericich, her son Robert (Moose) Aguirre, Grandsons Chuck and Bobby Aguirre. She is survived and will be so missed by Son- Chuck Aguirre, son and daughter-in-law - Philip and Margie Aguirre, Daughter and son-in-law - Millie and Dennis Rigby, Daughter-in-law - Judy Aguirre, Son-in-law - Mike Davis, Grandchildren: Roberta (Bob) McGarry, Judy (Jim) Wonnacott, Dave Aguirre, Angie Davis (Mike Poole), Jason (Noelle) Davis, Cody (Liz) Aguirre, Tawni and Cameron Aguirre, Jason (Lisa) Rigby, Cory, Jamey and Jody Rigby, Great -grandchildren: Kristin Wonnacott (Jeremiah), Arianna and Brianna McGarry, Tyler and Ryan Wonnacott, Brysynn and Zain Dunn, Peyton Poole and Mathew Aguirre and Macy Rigby, Great-Great-granddaughter - Isabell Wonnacott, and Adopted Granddaughter -Terri (Bill) Boyle and family. Mom, Nana we will miss you forever. Thank you for everything you did for all of us. We will all cherish the memories we have of you.

Our beloved Mother and Nana Alpha Aguirre-Pericich went peacefully "home" on March 28th in her daughters home, surrounded by her family. Alpha was born February 7, 1929 the seventh of ten children in Garrison, North Dakota. She was raised on... View Obituary & Service Information

The family of Alpha Hazel Aguirre-Pericich created this Life Tributes page to make it easy to share your memories.

Send flowers to the Aguirre-Pericich family.