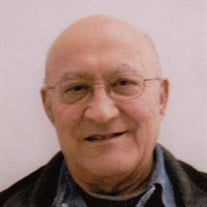 Angelo Joseph Monaco passed away early Friday morning at Genesis Health and Rehab Center in Butte, surrounded by his loving family. He was born in Anaconda Thursday, May 2, 1929 to Italian immigrants, Antonio and Concetta (Galia) Monaco. Angelo was raised and educated in Anaconda and was interested in auto mechanics from the time he could walk. He worked at several jobs, delivered packages for the post office, worked at the bank, worked as a mechanic all his life, including time for the US Government at Ft. Hall in Idaho and was really a “Jack of All Trades”. Elk hunting was a passion for Angelo. He served his country in the 96th Infantry of the US Army and was honorably discharged. Angelo was the “Jeep” guy in and around Anaconda and if you needed a part or advice for a Jeep, he was the guy to see. If he didn’t have the part you were looking for, you probably didn’t need it! Angelo married Jean Yvonne Manion in Anaconda on March 17, 1951 and she survives. Also surviving are his sons and daughters-in-law: Loran and Patti Sue Monaco of Adams, Oregon, Tony and Patti Gail Monaco of Wisdom, Dan and Pam Monaco of Billings, daughter and son-in-law, Patty Jean and Dan Stoner of Helena, grandchildren: Shawn and Corrine Monaco, Lori Monaco-Mills, Michael and Jordan Monaco, Kevin and Kezlee Monaco, Lynsey and Ryan Elliott, Valory and Cole Hoefle, Trisha and Kyle Klock, Danielle and Wes Feist, Ryan Monaco, Andrew Monaco and Sarah Monaco. Great Grandchildren include: Dylan and Dayton Monaco, Tabor and Trayson Mills, Austin, Tynlee and Hallee Monaco, Blake and Avery Elliott, Abigail, Alivia and Alden Hoefle, Keira and Kellen Klock, Jaxsen Green and Trenten Feist. Also surviving are his sister, Jean Buhl of Libby, brother and sister-in-law, Tom and Rikki Monaco of Stevensville, brothers-in-law and sisters-in-law, Jim Manion of Colville, Washington, Tom and Leilani Schroeder of Deer Lodge, Judy Wise of Meridian, Idaho and Don Schroeder of Philipsburg. He is preceded in death by his daughter, Shirley Monaco and grandson, Robert Monaco.

The family of Angelo Joseph Monaco created this Life Tributes page to make it easy to share your memories.

Send flowers to the Monaco family.