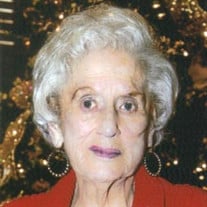 The world lost an amazing woman, Montana lost a true pioneer, Butte lost a hearty spirit and our family lost a grand matriarch when Ann Copperi started her second century in a better place. Ann Catherine Copperi, longtime resident of Butte died Thursday, April 7,2016 in Meridian, ID. She was born in Baltic, Michigan on September 2, 1915, to Joseph and Mary Panion. The family of seven moved west in a Durant automobile on all dirt roads with all their belongings including china strapped to the running boards and settled in Butte on the 4th of July 1928. Ann married Joseph Copperi in Sacred Heart Church in Butte on June 27,1937. She loved traveling with Joe, especially to Hawaii". She was a classy lady, always dressed to the "nines" and kept in shape walking and working out at Curves. Dining at Lydia's was a favorite and her daily lunch visits with friends at Wendy's was a highlight of her day. She was a very active member of St. Ann's Catholic Church. In February 2013, Ann moved to Idaho to be close to family. Her family includes her son Joe (Pat) Copperi of Meridian, ID; daughter, Annette (Carl) Rummel of Missoula, MT; grandchildren, Kimberlee Copperi; Kevin (Kelly) Copperi; and Riley (Tanya) Sullivan; Amanda Sullivan; and Ryan (Christina) Sullivan; great-grandsons Tanner, Teryn and Trevyn Irby; and Brett and Dillon Copperi; and great-granddaughter Malia Sullivan; her only great-granddaughter, born in 2015, making her and her great-grandma 100 years apart. She was preceded in death by her husband of 62 years and her four siblings, Joe Panion, Mary Bates, Fred Panion and John (Baker) Panion. Ann celebrated her 100th birthday on September 2, 2015 with a family dinner and a party with family and her dear friends and staff at Grace Assisted Living in Meridian. All wore red - her favorite color.

The family of Ann Catherine Copperi created this Life Tributes page to make it easy to share your memories.

Send flowers to the Copperi family.