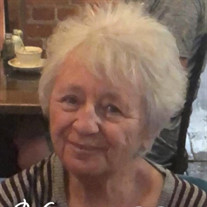 Arlene Joan Carver passed away Friday, November 12, 2021 at the Bee Hive Homes of Butte. She was born in Butte Saturday, August 26, 1939 to John J. “Jack” and Betty (Levinski) Magill. Arlene was born on her mothers birthday and always said that she was her mothers birthday present. Arlene attended Butte schools, graduating from Butte High School and on July 18, 1958 she was united in marriage with Wesley Robert “Bob” Carver. Together they made their home in Butte and had three children. Arlene operated PBS Home Decorating for several years and stayed busy with countless other activities. She served as secretary and treasurer of the MASSA Speed Skating Club, enjoyed bowling and served as secretary of her league. She and Bob enjoyed motorcycle riding, hunting, golfing and four-wheeling. When not out in the mountains Arlene was busy with the activities of her children, grandchildren and babysitting her grandchildren and numerous nieces and nephews. Arlene is preceded in death by her parents, husband Bob and great-grandson Mitchel Wayne Gray. She is survived by her sons and daughters-in-law, Robert Wayne “Rusty” and Sally Carver, Ken and Zana Carver and daughter and son-in-law, Cynda Lynn and Gary Ritter all of Butte. Grandchildren include: Sara Gray and Garrett Lambson, Robert and Shelby Carver, Jamie Ritter and Bear Stillwagon, Kody Carver, Bryce Carver and Mitch Gray. Great-grandchildren include: Roman Gray, Mason Gray, Dylan Lambson, Trace Lambson, Madison Carver and Taylor Brown. Also surviving are her sister and brother-in-law, Sharon and Mick O’Brien of Butte as well as numerous nieces and nephews in Butte and throughout the country. Arlene’s family would like to thank the loving care that she received from the Bee Hive staff house number 2 and Senior Solutions nurse Julie. Cremation has taken place. Memorial services will be conducted Thursday, November 18th at 11 AM in Wayrynen-Richards Funeral Home with Deacon Dan McGrath officiating. A reception will follow in Wayrynen-Richards Community Center and interment will take place later that afternoon at 2 o’clock in Sunset Memorial Park. In lieu of flowers, memorials in Arlene’s name may be made to the Shriners Children’s Hospital, Primary Children’s Hospital, Alzheimer’s Research or a charity of donor’s choice.

The family of Arlene Joan Carver created this Life Tributes page to make it easy to share your memories.

Send flowers to the Carver family.