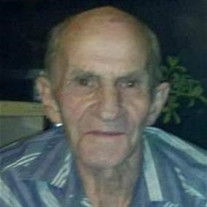 Arlie James Davis passed away Sunday morning at his home in Butte following an extended illness. He was born in Page, North Dakota March 2, 1938 to Eugene Thomas and Ruby (Hendrickson) Davis. He was raised and educated in International Falls, Minnesota where he entered the United States Navy in 1945. He traveled around the world twice before his honorable discharge in 1954. He worked as a mechanic and lumberjack in the White Sulfur Springs before moving to Butte in 1959. Arlie worked in the Butte mines for 24 years from 1964 until 1988 when he suffered a crippling fall down the Missoula shaft. He had also worked fighting forest fires during the summer months. Arlie met the love of his life, Sandra Sedaris in 1974, and they have been together ever since. Also surviving are his brother, Raymond (Vernice) Davis of Brewster, WA, nieces and nephews, Louis (Debbie) Salminen and their children, Larry (Candy) Salminen and their children, William (Julia) Salminen, Jeff Davis, Debbie Olsen, Tricia Lemons, Gene Davis, 16 great-nieces and nephews and over 40 great-great nieces and nephews. Also surviving are his special friends, Nickola West, Bernard West, Larry and Mathew Jensen, Mark and Amie Kraus and their children, Martique, Jeremy, Justin (Kelsey) Kraus. Also surviving are his special little buddies, Ava Kraus and Arli Kraus who Arlie was greatly honored to have the little guy named after him. Arlie loved his many hobbies including wood carving, boating, camping, fishing, hunting and coaching Sandy's softball teams. He was an avid Washington Redskins fan. He loved his four dogs, Skeeter, Bratley, Prince and Pedro. In November of 2015 Arlie and his latest hunting partners, Jeremy Kraus, Mark Kraus and Jay Bressette fulfilled Arlie's goal for the past four years of bagging an elk during hunting season and he was ecstatic that he shot his elk and deer with his new rifle (an early Christmas present). Arlie enjoyed his frequent visits and phone calls from his great-nephew, Shane Salminen and his family.

Arlie James Davis passed away Sunday morning at his home in Butte following an extended illness. He was born in Page, North Dakota March 2, 1938 to Eugene Thomas and Ruby (Hendrickson) Davis. He was raised and educated in International Falls,... View Obituary & Service Information

The family of Arlie James Davis created this Life Tributes page to make it easy to share your memories.

Arlie James Davis passed away Sunday morning at his home in Butte...

Send flowers to the Davis family.