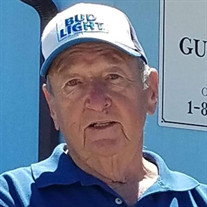 Arthur Edward “Artie” Mills passed away Saturday morning, March 13, 2021 in St. James Healthcare. He was born June 30, 1940 in Roundup, Montana to Albert and Alice (Spek) Mills. Artie grew up in Roundup, participating in sports at Roundup High School. He joined the United States Air Force and on November 24, 1962 married Carol Ann Nose in Roundup. Following his honorable discharge in 1966, they made their home in Butte where Artie worked as a computer operator for the Anaconda Company until 1985. He worked as a computer operator for the Montana Power from 1986 until 1996. Artie played baseball for the Butte Industrial League from 1967 until 1969 and was a player and managed for the Stauffer Chemical Company Team. He was among the leagues top hitters as well as playing short stop and 3rd base. Baseball was a passion for him and he coached and manage little league teams helping to impart his love for the game in countless children. His favorite team was the Cleveland Indians. He also enjoyed fishing, basketball, camping, hunting and gardening. Besides his parents, Artie is preceded in death by his brother, Alvin Mills, brother-in-law, Ken Byrd and his daughter-in-law, Pam Mills. Survivors include his wife Carol Ann Mills of Butte, sons and daughter-in-law, Brad and Jackie Mills of Calgary, Alberta and Craig Mills of Burley, Idaho, daughter, Brenda Mills of Roundup, grandchildren: Nolan Mills, Lauren Mills Molly (Jake) Mamer, Jake Mills, Maria (Aaron) Pelan and Emily Weigum. Great-grandchildren include Lily and Maggie Mamer. Also surviving is his sister, Cheryl Byrd of Billings and numerous nieces, nephews and cousins. Cremation has taken place. Funeral Mass will be celebrated Monday morning, March 22nd at 11 o’clock in St. John The Evangelist Catholic Church. His family will receive friends beginning at 10 o’clock. Interment will follow in Mountain View Cemetery. A celebration of his life will be conducted this summer when covid restrictions are lifted. Butte-Silver Bow Covid guidelines must be followed and masks are required for all in attendance. Memorial in memory of Artie may be made to Butte American Legion Baseball, PO box 3592, Butte, MT 59702.

The family of Arthur Edward "Artie" Mills created this Life Tributes page to make it easy to share your memories.

Send flowers to the Mills family.