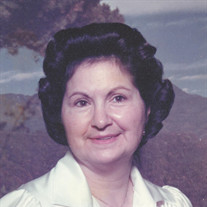 Audrey Fotopoulos Moran passed away quietly on Monday afternoon, May 25, 2015, at the age of 91 in Helena, Montana. Audrey was born on August 22, 1923, in Racine, Wisconsin, the daughter of Constantine (Charles) Elias Fotopoulos (born in Skilountais, Olympia, Ilias, Greece) and Zilpha May Billman (born in Idaho Falls, Idaho). Her family soon moved to Chicago where she attended Washington Elementary School and the Lucy L. Flower Technical High School, an all-girls school, graduating on June 22, 1942. While at Flower High School, in addition to traditional coursework, Audrey enrolled in a two-year vocational studies program where she excelled in sewing, dressmaking, millinery, baking and home economics. Shortly after graduating, she went to work as a telephone operator. A few years later she traveled to Montana to visit her Billman relatives. During her stay in Montana she met and married Keith Moran in Livingston, Montana. They later separated and divorced in l97l. Audrey's skills learned while at Flower High, and refined over the years, were instrumental in raising and providing for her five children while living in Livingston and later in Missoula, Montana. She had a strong work ethic, often working multiple jobs to provide for her children during some lean times. After moving to Missoula, Audrey worked as the switchboard operator for St. Patrick's Hospital, retiring in 1978 after twenty-some years of loyal and dedicated service. Soon thereafter the Missoula Southgate Mall opened and she became an office assistant at Hennessey's Department Store. She enjoyed sharing fond memories of the many fine, caring and considerate co-workers she met over the years, especially those she met while working at Hennessey's. Audrey moved to Butte, Montana in 1985 and soon found employment as an in-home caregiver for many years. Audrey was an accomplished dressmaker and baker, and used these skills to the benefit of her children, friends and co-workers. Her favorite leisure activities were reading, watching classic movies, and she especially enjoyed crocheting afghans and blankets, many of which adorn family and friends homes. She donated many of her afghans and blankets for various fundraising causes. Audrey was proud of her children's accomplishments and the accomplishments of her grandchildren. She remained a resolute, independent woman throughout her life and will be dearly missed and fondly remembered. Survivors include: daughter Kathleen Moran, Helena; daughter Barbara Skeen, Helena, and her children Charles and Donna; son Timothy and Rebecca (Westlake) Moran, Beavercreek, Ohio, and their children Elizabeth (Jon) Westlake, Nicholas Westlake, Colleen, Tara Kendall, and Chance; son Kim and Colleen Moran, Butte, and their children Shauna (Jared) Moffitt, and Dan (Sarah); son Kevin Moran, Livingston; sister, Martha Meadows, Surprise, Arizona; brother, Angelo Fotopoulos, Weeki Wachee, Florida; and several nieces and nephews. She was preceded in death by her parents Charles and Zilpha Fotopoulos; brothers' Lee, Andrew, and Daniel Fotopoulos; and son-in-law Randy Skeen.

Audrey Fotopoulos Moran passed away quietly on Monday afternoon, May 25, 2015, at the age of 91 in Helena, Montana. Audrey was born on August 22, 1923, in Racine, Wisconsin, the daughter of Constantine (Charles) Elias Fotopoulos (born in Skilountais,... View Obituary & Service Information

The family of Audrey Fotopoulos Moran created this Life Tributes page to make it easy to share your memories.

Send flowers to the Moran family.