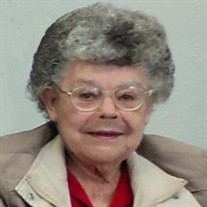 Barbara Ann Harwood passed away Friday evening, October 5, 2018 at St. James Healthcare in Butte, MT. She was born in Burke, Idaho on June 4, 1928 to William A. and Agnes (Gilston) Gant. Barbara was raised in Lima and attended the Butte Business College after moving to Butte. She and Alton Harwood were united in marriage in a double wedding with his brother and sister-in-law, Stanley and Marian on July 12, 1947, celebrating 71 years of marriage this past summer. Barbara worked as a bookkeeper for General Electric and later Len’s Foods. She was a longtime and very active member of Ruth Chapter # 2, Order of the Eastern Star, The Church in the Valley, a 70+ year member of the American Legion Auxiliary, served as Grand Secretary and Member of Honor of Bethel # 2 and the Grand Bethel of Montana, Job’s Daughters. She also served as a Campfire leader for 7 years and was active in the PTA. Although she had many interests, her greatest joy was her family. Her loving devotion to her family, her friends, and her God was central to all of her actions. Barbara is survived by her husband, Alton Harwood of Butte, sons and daughters-in-law: John and Eliza Harwood of Butte, Robert and Shelley Harwood of Butte, Karen Harwood of Spokane, Sharol Harwood of Spokane, daughters and sons-in-law, Ruth and Clark Walters of Butte, and Jeanette and Kevin Clark of Butte. Surviving grandchildren include: Gretchen and Devin Ragsdale, Sam and Katie Walters, Brianna Harwood, Mikaila Ramone, Katrina and Clay Hammock, Eli Harwood, Carissa and Jake Hassler, Natasha Harwood, Isabella Harwood, Joshua Harwood, Nicole Harwood, Jessica and Kelly Short, Tristan Harwood, Caleb Harwood, Brandi Rilkoff, Gunther Clark, and Leif Clark. Great-grandchildren include: Lydia and Theodore Walters, Kathryn, Kaiden and Sophia Ragsdale, Goldmund Goehner, Meredith Varady-Harwood, Ryan and Aurora Kemper, Evelyn Peterson, Carson Short, Alexander and Adrianna Rilkoff. She is also survived by her sister, Doris Smith; Sisters-in-law and brothers-in-law, Agnes Gant, Leroy and Mary Miller, Lou and Georgene Harwood, Marilyn Bohn, Faye and Julie Miller, as well as numerous nieces and nephews. Barbara was preceded in death by her grandparents, John and Barbara Gilston, parents, sons, Jim Harwood and Charles Harwood, grandson, Joal Harwood, brother, Preston Gant, mother-in-law, Ruth Miller, sisters-in-law and brothers-in-law, Naida and Carl Williams, Stanley and Marian Harwood, and Bill Bohn. Memorials may be made to the Church in the Valley or the Shrine Transportation Fund, 314 W. Park St. Butte, MT 59701.

Barbara Ann Harwood passed away Friday evening, October 5, 2018 at St. James Healthcare in Butte, MT. She was born in Burke, Idaho on June 4, 1928 to William A. and Agnes (Gilston) Gant. Barbara was raised in Lima and attended the Butte Business... View Obituary & Service Information

The family of Barbara Ann Harwood created this Life Tributes page to make it easy to share your memories.

Send flowers to the Harwood family.