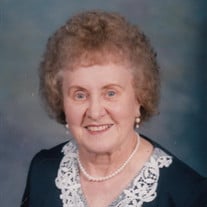 Mrs. Barbara Malesich passed away Tuesday, September 19, 2017 at St. James Healthcare. She was born in Butte January 21, 1917, the daughter of Joseph and Barbara (Zunich) Ivanich. She attended local schools and later worked at Symons Dry Goods Co. Barbara married Edward Malesich on June 19, 1937 and he preceded her in death on October 2, 1992. Also preceding her in death are her parents, her brothers, Joe and Rudy Ivanich and her sister, Mary Cash. Her hobbies were sewing and knitting. She also like to square and round dance as well as ball room dancing. She belonged to the Butte Pioneer’s Club, the Happy Times Club, ARCO Retirees Club and the Silver Beaus and Belles Square Dance Club. She is survived by her son Edward Malesich of Butte, son and daughter-in-law, Robert and Janet Malesich of San Antonio, Texas, daughter and son-in-law, Joan and Kevin Byrnes of Richmond, Virginia, grandchildren, Chad, Todd, Neil and Wade Malesich as well as ten great-grandchildren. A special thank you is extended to the staff, nurses and CNA’s in wings 100, 200 and 400 at the Copper Ridge for all their compassionate care of Barbara over the past 4 ½ months. Thank you also to the staff, caring nurses, CNA’s and students from Mt. Tech Nursing School for giving Barbara excellent care in her last days. Memorials may be made to a charity of the donor’s choice.

The family of Barbara I. Malesich created this Life Tributes page to make it easy to share your memories.

Send flowers to the Malesich family.