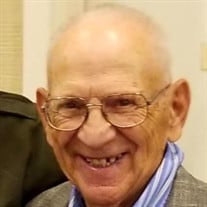 A good man died today. He wasn&#8217;t famous. You won&#8217;t find his name in the history books. But he was a good man who lived a good life and he will not be forgotten. Bernard Lazzari was born on March 6, 1925 to Josephine (Pesanti, later... View Obituary & Service Information

The family of Bernard J. "Bernie" Lazzari created this Life Tributes page to make it easy to share your memories.

A good man died today. He wasn’t famous. You won’t find his name...

Send flowers to the Lazzari family.