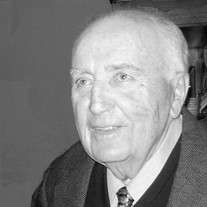 Bert Markovich, 96, passed away Tuesday, May 10, 2016, at Big Sky Living where he had resided for the past five years. Bert was born on October 3, 1919, in Dillon, MT, the son of Bartol and Mary (Rebich) Markovich, immigrants who came to America from Plemenitas and Stari Trg, Austria-Hungary. Shortly after his birth the family moved to Butte so his dad could work in the mines. In 1925 Bert entered Greeley school; he was unable to speak English and tasked with not only learning the new language but also with coming home and teaching it to his parents, which he did. Bert graduated from Butte High School in 1937 and shortly thereafter enrolled in Butte Business College, graduating in 1938. In 1939 he began his work career at Montana Leather Company, a MacPherson family leather and shoe-finding business with operations throughout the western United States. Bert’s relationship with the MacPherson family lasted over 47 years, a partnership that was beneficial for both sides. In 1942 Bert enlisted in the Army and was stationed in the Persian Gulf doing administrative tasks including decoding and recoding various communications. One of the highlights of his tenure in the Army was being present for the Tehran Conference—attended by Roosevelt, Churchill, and Stalin—where plans for the Allied invasion of France were discussed. In 1945 Bert returned home from the war and resumed his career at Montana Leather Company. On October 6, 1951, he married Mildred Prothero, and they spent the next 50 years together until her death in 2001. Together they formed a great partnership, each of them able to promote his or her own separate but compatible values and beliefs. Bert cherished his family and he remained involved in all of our lives until the end. Bert was preceded in death by his parents, Bartol and Mary; infant son Michael; sister and brother-in-law Dorothy and Bill Beaulieu; sisters and brothers-in-law Ed and Irene Kelly, Curly and Mary Wold, Jack and Loretta Prothero, Mick and Helen Paffhausen; and daughter-in law Mary (Greg) Markovich. Survivors include sons and daughter Bert (Theresa) Markovich, Mill Creek, WA; Greg Markovich, Houston, TX; Kevin (Jane) Markovich, Butte, MT; Janet (Scott) Hoversland, Casper, WY; and Steve (Monica), Markovich, Houston, TX. In addition, grandchildren Megan, Matt, and Joe Markovich; Annie, Mike (Sophia), Pat, and Katie Markovich; Erin, Dan, and Tom Markovich; Rachel, Marcus, Stephen, and Laura Hoversland; and Lizzie, Grace, Stevie, and Sam Markovich. Heartfelt thanks goes out to all his loyal and trusting friends who stayed with him to the end, especially Dunk Darragh, Jim and Sharon Leary, Ralph McCaughey, and countless others. In lieu of flowers, the family asks that donations be made to a charity of donor’s choice.

Bert Markovich, 96, passed away Tuesday, May 10, 2016, at Big Sky Living where he had resided for the past five years. Bert was born on October 3, 1919, in Dillon, MT, the son of Bartol and Mary (Rebich) Markovich, immigrants who came to America... View Obituary & Service Information

The family of Bert W. Markovich created this Life Tributes page to make it easy to share your memories.

Send flowers to the Markovich family.