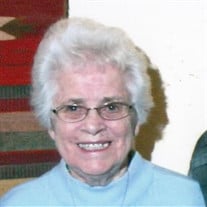 Mrs. Betty Jane Johns Helstrom passed away Saturday evening at The Springs at Butte Assisted Living. Betty was born in San Francisco, California on May 11, 1929 to William and Elizabeth (Bess) Johns. Her family moved twice between San Francisco and Butte while Betty was a child. She attended schools in both San Francisco and Butte, where she attended the Grant School. She graduated from Butte High School in 1947. Betty’s first job was at a San Francisco butcher shop when she was a young teen. Book keeping was her career, and she worked at Cahill-Mooney Construction Company and at the accounting firms of Keith McCauley and Robert Prigge. She also did book keeping for Fritz’s Ski Haus and the Top Deck and Lydia’s restaurants. Betty met Robert John (Bob) Helstrom at Cahill-Mooney and they were married on October 15, 1948. They built and lived in their home for over 60 years and celebrated their 69th wedding anniversary in the months prior to Bob’s passing in March 2018. Betty took great pride in her work, her family, and in her ability to empathize with and help others. She was a member of St. John’s Episcopal Church. She enjoyed her bridge clubs and was a member of the East Side Volunteer Fire Department Ladies’ Auxiliary and the Home Atherton Garden Club for many years. Betty also enjoyed her dogs, playing the piano, sewing and other handcrafts, assisting with her daughter’s Girl Scout activities, the family camping trips, motorcycle trips with Bob, and family gatherings. Betty loved all her family and friends. She is survived by her son and daughter-in-law, Don and Betty Joyce Helstrom, of Butte, daughter and son-in-law, Arlee and David Kachensky, of Niwot, Colorado, grandchildren Keith (Kathryn), Kyle (Sarah), and Kate Helstrom and Christine and Matthew Kachensky, and great-granddaughter Grace Kachensky-Miller. Also surviving are her sisters and brothers-in-law Bonny and Milo Hemmert of Butte and Barbara and Darwin Davis of Riverton, UT, an aunt, Jennie Sullivan of Butte, and several nieces, nephews, and cousins.

The family of Betty Jane Helstrom created this Life Tributes page to make it easy to share your memories.

Send flowers to the Helstrom family.