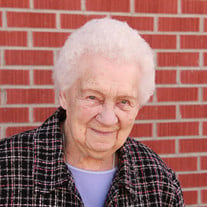 After compassionate care and surrounded by her family during the last weeks and days of her life, Bina M. Boyd passed away at the age of 98 on November 10, 2018 at Big Sky Senior Living in Butte, Montana. Bina was born April 6, 1920 on the homestead of her parents, David and Anna Murk, in rural Reserve, in Eastern MT. She grew up and went to elementary school in Reserve. After graduating from Medicine Lake High School, with a scholarship to Minneapolis Business College, Bina moved to Minneapolis to live with an aunt. Romell and Judy were born in Minneapolis in her first marriage, after which she moved back to Montana to live with her parents in Bozeman. She soon met and married Paul Boyd, a miner, in May, 1946 and they made their home in Butte where Jackie, Paula and David were born and where she lived for the rest of her life. Bina and Paul raised the family of five children and she lived a happy and active life, with many family activities. Their place at Georgetown Lake was always a gathering space for friends and family and she enjoyed every summer there including Bina’s last one. She was involved in various local organizations, especially at Gloria Dei Lutheran Church, where she was active in church life, participating in Bible study and quilting groups. She was still quilting in the spring of this year. In 1952, the Boyds bought the Mint Bar on Mercury St. where she worked along side of Paul until his death, November 22,1974, after which she continued to operate the business with her son until she retired in 1992. Surgery for colon cancer at the age of 80 years did not slow her down as she traveled to visit her children in many locations, including Nicaragua, Ecuador, Minnesota and California. Her daughter Paula and granddaughter, Janel Morgan, became special companions who included her in many happy times during her advancing years. Great granddaughter, Leslie Lucky Velgach visited “old” Grandma almost every summer starting at age three until July, 2017, when Bina attended Leslie’s wedding at Georgetown Lake. Bina was proceeded in death by her parents, 3 brothers, 2 sisters, her husband Paul and a son-in-law Charles White and is survived by five children, Romell White, Minneapolis, Judy Aaker (Jerry), Butte, Jackie Pascoe (Jack), Grass Valley, CA, Paula Morgan (Ken) and David Boyd (Julie), both of Butte; her 16 grandchildren: Todd (Linda) White, Bradley (Laura) White, Bret (Rachel) Aaker, Lani Lucky, Daniel (Sarah) Aaker, Jason (Renae) Scalabrin, Shane Scalabrin, Janel Morgan, Ryan Morgan, Jessica Jeffery, Nick Jeffery, Rachel (Chris) Benski, Noelle (Shaun) Coates, Alexandra Jeffery, Lindsey Boyd, and Hayley Boyd. 16 great grandchildren, 5 great great grandchildren, numerous nieces and nephews, many friends & other relatives. In lieu of flowers, memorials may be made to Gloria Dei Lutheran Church or The Butte Food Bank.

After compassionate care and surrounded by her family during the last weeks and days of her life, Bina M. Boyd passed away at the age of 98 on November 10, 2018 at Big Sky Senior Living in Butte, Montana. Bina was born April 6, 1920 on the homestead... View Obituary & Service Information

The family of Bina M. Boyd created this Life Tributes page to make it easy to share your memories.

After compassionate care and surrounded by her family during...

Send flowers to the Boyd family.