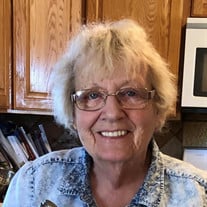 Bonnie Belle Boone Wilcox died peacefully in her home on July 17. She was born in Dillon MT on June 15, 1941 to Bill (Robert William) and Edna (Gordon) Boone. Bonnie basked in the loving care and attention given to her by her family and close friends during these last years of her life. They loved her fiercely, no doubt because Bonnie loved fiercely. Those of us lucky enough to be in Bonnie’s circle were gifted her generosity, devotion, patience, and humor. Gramma Belle was a mermaid! When she was born her family lived in Armstead, which is now the bottom of the Clark Canyon Resevoir. Her parents had a grocery store there and paid for her delivery with eggs. A bargain for sure. As a child Bonnie and her little brother Bill traveled by train to Los Angeles, California to spend summers with their dad. She returned from these trips with a stylish new wardrobe, and more importantly, it was in California where Bonnie prepared her first meal, a spaghetti dinner for her dad. Bonnie was a cook. She loved to make special meals for the people she cared about, always remembering their favorite dishes. She was a curator of recipes and cooking secrets and she loved passing on these skills and traditions to her kids and grandkids. Food and cooking are intertwined with family memories of Bonnie - making raviolis at Storm Lake, packing a trailer full of munchies and salads for a girls’ camping trip in the summer of ‘76, preparing Thanksgiving feasts with canned tuna as a young Navy bride. There are so many memories. In Butte, Bonnie and cooking are synonymous. Bonnie catered out of the Elk’s kitchen for all the local clubs - Rotary, Kiwanis, Toastmasters, for instance. She later established her own business from the catering kitchen in her own basement. For years Butte families celebrated milestone events and memorialized their lost loved ones over Bonnie’s delicious dishes. Booby was devoted to her husband, Bob, and she especially treasured memories of the days they spent stationed in various Naval bases on the east coast. After his death, Bonnie and her daughters took a once in a lifetime trip to New York City and New England. She showed them the houses they lived in together and the hospital on the base in Rhode Island where Becky was born. Bonnie was a very good friend. And because of that she was blessed with very good friends. She knew how to listen and how to show up when her friendship was needed and her friends showed up for her. In her later years she made several good friends through her yoga classes, volunteer work at the food bank, and as the only female student in her woodcarving class. Gbelle was a grandmother and great grandmother to many. She was a buyer of college texts, new shoes, and pajamas. An eager audience for dance performances, school programs, and ball games. A top-notch cookie baker. A warm hug and a soft cheek. She loved us and we knew it. Mom was a best of mothers. We never questioned her loyalty, support, pride, or love. We are better people because of her. Bonnie was preceded in death by her parents and husband, her infant grandson Kyle Weis, and her special aunt Betty Kleppin. She is survived by daughters Kari Spolar and Becky Weis (Dennis), son Bob Wilcox (Dawn), grandchildren Stacy Wilcox, Jesse Weis (Serena) and Hannah Weis, Marky Spolar and Roxzan Spolar (Joree Weinstock), Zora, Frank, Inga, and Ferris Wilcox, great grandchildren Kenzie and Cashton Spolar, Henry and Louis Babcock (John), Parker And Emmy Weis, Sophy and Mazee Weinstock, and brother Bill Boone (Mary) and several nieces and nephews, and brother in law Jim Wilcox (Craig Holtorf). She is also survived by Shawna Gibson and many special friends who continued to visit her during her last months, and her dog Flipper who was always by her side. Graveside entombment services will be conducted Monday afternoon, July 27th at 2 o’clock in Mountain View Cemetery with Deacon Dan McGrath officiating. A celebration in honor of her life will follow at her home. Memorials are suggested to the Butte Food Bank.

Bonnie Belle Boone Wilcox died peacefully in her home on July 17. She was born in Dillon MT on June 15, 1941 to Bill (Robert William) and Edna (Gordon) Boone. Bonnie basked in the loving care and attention given to her by her family and... View Obituary & Service Information

The family of Bonnie Belle Boone Wilcox created this Life Tributes page to make it easy to share your memories.

Send flowers to the Wilcox family.