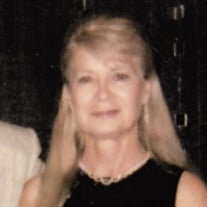 Carol Ann Panion our beautiful, sweet, loving wife, mom, grandma, sister, and friend passed away on Monday afternoon July 19, 2021 in Madison Valley Medical Hospital Ennis, Montana. Surrounded by so much love for her last days. She was born on February 16, 1949 to William Stepper and Mavis Kemp in Glasgow, Montana. Mavis married Kenneth Anderson and the family relocated to Butte, Montana. Carol grew up with her six siblings in Meaderville with many interesting stories to tell. At a young age, Carol became a mother of four to: Jamie, Tracy, Francis, and Tammy. Her wild spirit carried her down various paths during this time. Ultimately, leading her into the arms of a man named Frederick Panion, who instantly became the love of her life when he tackled her to the ground at the fishing access on the Jefferson River in Cardwell, Montana. Forever wrapping his heart around her and her children. May 8, 1976 they were wed. Together this duo raised their family to know hard work, strength, and above all love. Throughout Carol’s life she poured color and life into anything and all she did. Her art canvases weren’t the only thing glowing from her touch. She wore many hats in life working for Butte School District, being a Minister’s Wife, Head Supervisor at Rocky Mountain Christian Academy, dabbled in selling real estate, and opened a consignment store. After relocating to Three Forks, Montana she continued being a bright light in the community by working for Three Forks School District, and eventually helping the Iron Horse Café flourish. Carol’s adventures were limitless in exploring this life with all of her family and friends. She enjoyed the great outdoors and all its glory, along with gardening, travelling, camping, hunting, fishing, snowmobiling, four wheeling, boating, painting, singing, dancing, and playing guitar. She made extra special bonds with her puppy dogs: Holly, Crusier, Huey, and her precious Snuggles. However, her most favorite thing in the world was definitely her grandchildren. 6 years ago, Fred and Carol permanently moved to their beloved cabin in the Gravelly Range. During that time, they alternated winter time spent in Phoenix, AZ and Huntsville, AL. Carol was the definition of a “tough cookie”. She faced life head on, and knew how to remain humble. She taught us all what perseverance looks like, and most importantly how to love. Words will never describe what Carol meant to her family and friends. Her beautiful wild spirit will forever live on through those she loved and touched. Carol was preceded in death by her mother, Mavis Anderson; father’s, Kenneth Anderson and William Stepper; brother, Roy Anderson; brother-in-law Bill Pesanti; nephew, David Stepper, mother and father-in-law Fred Panion and Darlene Panion- Berube, best friend, JoAnn McCallister. She is survived by her husband, Frederick Panion; her four children; Jamie (Tony) Leyba{grandchildren: Brittany (Riley) Masters, A.J Leyba, Sam (Syndey) Leyba}, Tracy (Chris) Wolsifer {grandchildren: Samantha (Will) Smigel, Jessica (David) McCartan, Alex & C.J Wolsifer}, Francis Panion{granddaughter: Frankie (Dallas) Nelson}, Tammy Panion {grandson: Fred (Maleese) Panion}; Siblings: sister, Sharon Stiffarm; brother, David (Barb) Stepper; brother, Joe (Marsha) Anderson; sister, Julie Pesanti; brother, Gene Anderson; sister, Robin (Greg) Martin; In-Laws: Darlene Hart; Danene (Marty) Petritz; Donelle (Dan) Kuchtyn; John Panion; and father-in-law, Dan Berube; Great Grandchildren: Xaiden, Leyton, Charlie; Lucas, Amelia; Jaxon, Jayden; and Rowan; many wonderful nieces and nephews. Services will be held Monday July 26, 2021 at Wayrynen-Richards Funeral Home. Visitations will begin at 11 AM. Service is at Noon. Memorials in her memory can be made to Three Forks Food Bank. PO Box 836, Three Forks, MT 59752.

The family of Carol Ann Panion created this Life Tributes page to make it easy to share your memories.

Send flowers to the Panion family.