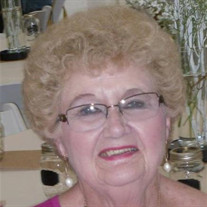 Cecilia Ann “Lee Lee” Erlandson passed away Monday morning in a local hospital. She was born in Butte May 12, 1942 to Richard and Gertrude (Stevens) Holland. She graduated from Butte High School and attended the Butte Academy of Beauty Culture. She worked as a beautician in several shops in Butte including Fashion Curl and has been the hairdresser at the Crest Nursing Home since 1990. A proud Irish lady from Anaconda Road, Lee Lee was also a longtime member of St. Ann’s Catholic Community and a proud and die hard Democrat. She belonged to the Ancient order of the Hibernians, the Daughters of Isabella, was a volunteer in the Senior Companion Program and an AVON representative for over 25 years. She enjoyed traveling and was always there for everyone, especially the kids with little gifts nearly every time they met. She loved deeply and forgave quickly and completely. Cecilia and Ronald Erlandson were married June 12, 1972 in Lewistown, Montana and he preceded her in death on August 26, 2009. She is survived by her son, David Erlandson of Butte, brother and sister-in-law, Richard and Carol Holland, nieces and nephews: Cathy Driscoll of Helena, Danette Driscoll of Sumner, Washington, Susan and Nate Bean of Lake Sammamish, Washington, Connie Holland of Casper, Wyoming, Chuck and Jennifer Driscoll of Helena, Robert and Cheryl Driscoll of Woodinville, Washington, Steve and Donna Holland of Colorado, great nieces and nephews: Maureen Black, Sean, Kyleigh, Molly and Dan Driscoll, Christa Leach, Jaclyn Schulte, Tom Johnson, Ashley Driscoll, Jordan Driscoll, Lindsay, Joseph and Nathan Richardson, Shalyn and Marissa Bean, Christa and Cody Leach and her great-great nieces and nephews Brooklynn Leach, Jayden Driscoll, Ty Johnson, Jackson, Trenton and Makenna Danielson and Callum Black. Besides her husband, she is preceded in death by her sister, Mary Monica Driscoll and her brother-in-law, John F. Driscoll.

Cecilia Ann &#8220;Lee Lee&#8221; Erlandson passed away Monday morning in a local hospital. She was born in Butte May 12, 1942 to Richard and Gertrude (Stevens) Holland. She graduated from Butte High School and attended the Butte Academy of... View Obituary & Service Information

The family of Cecilia Ann Erlandson created this Life Tributes page to make it easy to share your memories.

Send flowers to the Erlandson family.