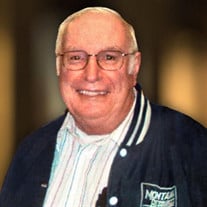 Mr. Charles G. Palagi passed away peacefully Saturday evening at the Copper Ridge Health and Rehabilitation Center surrounded by his family. He was born in Butte July 24, 1941 the only child of Augustine A. "Gus" and Laura D. "Toots" (Vivian) Palagi. He was raised with his cousins, George Tierney, Dan Peters, Linda McGee, Roberta Smith and Myrna Vivian and never really knew he was an only child. He attended Butte schools, graduated from Butte High School and earned his degree in Metallurgical Engineering from the Montana School of Mines in 1964. He started his career with the Atlantic Richfield Corporation and soon became manager of the Clyde E. Weed Concentrator until its closure in December of 1985. In 1986 Charles was one of a small group responsible for starting Montana Resources Inc. He was made Vice President of Operations under Dennis Washington and following the mine closure in 2000 he decided to retire in November of 2001, but went back to work and was instrumental in the re-opening of the mine in 2003. Much of the contemporary mining history of Butte was influenced by Charles. Charlie married Brenda Brophy in Butte on June 29, 1968 and following her death on March 20, 1978, Charlie, with the help of his parents and brothers and sister in-laws, raised his two daughters, Patti and Pam. Much like his father, Charlie was a very nurturing person. He loved to feed his crew at the mine and took great joy in cooking for them right at the mine. He was also the one who spearheaded the feeding of "The Auditor" dog and took gentle care of his father until his death in 1999. Besides his wife and father, he is also preceded in death by his mother, Laura "Toots" Palagi. Charlie was an avid motor sports fan and enjoyed snowmobiling, motorcycles and cars. He collected guns, was a card carrying member of the NRA and a member of the Butte Gun Club. He is survived by his daughters, Patti Palagi of Fort Collins, Colorado and Pam Palagi of Seattle, Washington, brothers-in-law and sisters-in-law, Bernie and Moe Brophy, Barry and Pam Brophy and Barbara Brophy all of Butte, Nieces and nephews, Travis and Melissa Johnson, Matthew, Kellie and Britney Brophy, great niece and nephew, Reese and Rody Johnson as well as his longtime friend and companion, Nancy Jemmings of Butte. Memorials in memory of Charles may be made to the George Tierney Scholarship Fund c/o Butte High School, Shoes for the Sole c/o Butte High School attention Mary Kay Erickson, The Chelsea Bailey Animal Shelter or the Wounded Warrior Project.

Mr. Charles G. Palagi passed away peacefully Saturday evening at the Copper Ridge Health and Rehabilitation Center surrounded by his family. He was born in Butte July 24, 1941 the only child of Augustine A. "Gus" and Laura D. "Toots" (Vivian)... View Obituary & Service Information

The family of Charles G. Palagi created this Life Tributes page to make it easy to share your memories.

Send flowers to the Palagi family.