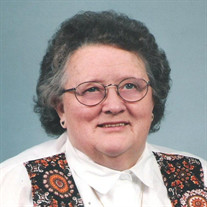 Clara Evelyn Engle passed away Thursday morning, February 25, 2016 at her home in Butte. She was born in Sioux County, North Dakota April 30, 1929 to John and Nora (Leveille) Hay. She attended schools in Lemmon, South Dakota and in March of 1948 she married Edwin Engle in Miles City, Montana. They moved to Butte in 1950 where Clara worked at several different jobs including the Moxom Cafe, Tiger Realty, the Murray Clinic, the Soroptomist Home and the Crest Nursing Home before taking a position with the Butte-Silver Bow Disaster and Emergency Services. She retired from that job at the age of 80. Clara was never one to let grass grow under her feet and returned to school in 1985, attending Butte Vo-Tech to study computer science. She was a longtime and active member of Gold Hill Lutheran Church, the Butte Pioneers Club, The Progressive Club and was a regular at the Belmont Senior Center. She, on behalf of the Butte Pioneer's Club, was named Grand Marshal of the 2012 Fourth of July Parade. Besides her parents, Clara is preceded in death by her husband, Edwin who passed away in 1985, her son, Robert who passed away in 2009, her brother, Leonard Hay and her sisters, Alice Dean, Lydia Wren, Margaret Gibbons and Marcella Ericsson. She is survived by her son and daughter-in-law, Edwin and Connie Engle of Butte, daughters and sons-in-law, Marian Engle and Linda Engle both of Great Falls, Betty and Bernard McKinney, Karen and Bill Galpin and Dorothy and Gary Tallon all of Butte. Surviving grandchildren include: Tabatha and “Speedie” Lingenfelter, Tammie Engle, Richard and Leah Mercer, Jason and Kim McKinney, Shawn and Tammy McKinney, Bernie and Brandy McKinney, Julee Blue, Heather and Stephen Harris, Cory Tallon, numerous great-grandchildren, great-great-grandchildren and sisters and brothers: Martha Paulson, Betty Paulson and John and Connie Hay. Memorials may be made to Gold Hill Lutheran Church, The Belmont Senior Center or the Butte Food Bank.

Clara Evelyn Engle passed away Thursday morning, February 25, 2016 at her home in Butte. She was born in Sioux County, North Dakota April 30, 1929 to John and Nora (Leveille) Hay. She attended schools in Lemmon, South Dakota and in March of... View Obituary & Service Information

The family of Clara Evelyn Engle created this Life Tributes page to make it easy to share your memories.

Send flowers to the Engle family.