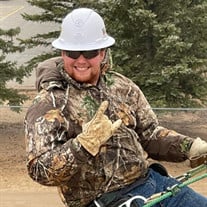 Conan Boyd Rehm, 20, of Power, MT died Dec. 12, 2021 as a result of injuries sustained in a motorcycle accident in Butte, MT. Conan was born April 29, 2001 in Great Falls, MT to James and Jana Rehm. He graduated from Power High School in 2019 and recently graduated from Highlands College at Montana Tech from the Pre-Apprentice Lineman Program. Conan grew up in Power where he was a typical boy, playing hard and full of spirit. He always had a way of playing Conan’s way. In kindergarten, Conan would hang out with the principal, Mr. Konen, where they would walk the halls together because Conan had gotten in trouble. Conan never feared the office; it more held older friends that he could talk with rather than punishment. As a young child, Conan was very active in gymnastics, wrestling, baseball, fishing and the outdoors. He played football, basketball and track during Junior High and High School. He once wore his snowsuit under his uniform during a football game. Everyone thought he was ridiculous until a blizzard blew in and they decided he may have been the smartest one on the field. During High School, Conan found success and received awards in Speech and Drama for his Dramatic Solos and in Choir where he placed at State with his beautiful bass voice. Conan enjoyed hunting, shooting, fishing, hiking, motorcycling, snowmobiling, and riding ATV’s. He was happiest when he was outdoors – especially if it was snowing. He was a true gear head and sought out knowledge from Power Sports Dealers both near and far. He always had a project to work on whether it was a motorcycle, snowmobile, snowbike, or improving the truck he received for his High School graduation. It was a true obsession that occupied much of his time. Conan enjoyed participating in Boy Scout Troop 57 in Fairfield, MT. There he met some of the most influential people of his life during his tenure in the Scouts. With the help of his leaders, Conan rose through the ranks of the Scouts and eventually earned the rank of Eagle Scout by raising money with his holiday Flag campaign and erecting a flag pole at the Power Fire Hall where he became a Volunteer Fireman. Conan had beautiful navy blue eyes, an infectious smile and a thirst for life and adventure. He loved to meet new people, make new friends, involve all those willing to participate in his shenanigans and help anyone who needed a hand. He was truly an angel long before he left this earth. Even in death, Conan was able to donate his corneas and tissues to help others. He is survived by his parents, James and Jana of Power, MT; sisters: Wednesday of Salt Lake City, UT, Violet of Power, MT and Italian sister, Antonella De Rosa and her family from Taranto, Italy; grandfathers: Jim Morris of Reno, NV and Richard Wright of Sacramento, CA; uncle Chris Rehm of Sacramento, CA; numerous great aunts, great uncles and cousins by the dozens. He was preceded in death by his grandparents: Geraldine Wright, Penny Rehm, Sonny Rehm and Linda Rehm. A celebration of life ceremony is planned for Sunday Dec. 19, 2021 at 1:00 pm at the Power High School Gym which will be live streamed on the NFHS broadcast system and on the Conan Rehm Memorial Page on Facebook with a reception at the American Legion Hall in Power. Cremation has taken place and was handled by Wayrynen-Richards Funeral Home in Butte, MT. Donations may be made in memory of Conan to the Power Volunteer Fire Department, the Uptown Optimist Foundation of Great Falls, or Boy Scout Troop 57 of Fairfield, MT. Express condolences at www.wayrynen-richards.com.

Conan Boyd Rehm, 20, of Power, MT died Dec. 12, 2021 as a result of injuries sustained in a motorcycle accident in Butte, MT. Conan was born April 29, 2001 in Great Falls, MT to James and Jana Rehm. He graduated from Power High School in 2019... View Obituary & Service Information

The family of Conan Boyd Rehm created this Life Tributes page to make it easy to share your memories.

Send flowers to the Rehm family.