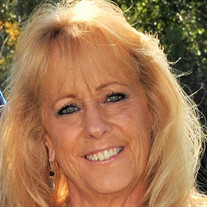 Connie Kay (Dunks) Wock, 59, peacefully passed away at home surrounded by family on June 8, 2017, after a long battle with cancer. Connie was born in Butte, MT, on September 15, 1957, to Thomas and Violette Dunks. She attended Rocker Elementary School, West Junior High, and graduated from Butte High School in 1975. She grew up on a ranch south of Rocker, where her passion for horses began. She spent many hours on the back of a horse, whether it was to move cows or spend the day with friends. At the young age of 16, Connie married the love of her life, Rick Wock. They spent the first five years of marriage traveling the western states, attending cowboy polo tournaments and rodeos. Connie was blessed with two children, Rick and Michelle. She was fortunate enough to be a stay-at-home mom and later became a cook at Ramsay School for 25 years. She devoted much of her time supporting her family and friends and always put others before herself. She enjoyed camping, horseback riding, 4-wheeling, exploring the mountains, and most of all, spending time with her grandchildren. Connie is survived by her husband Rick of 43 years; son Rick Jr (Lanny) Wock, daughter Michelle (Chase) Erickson, brother Jim (Janet) Dunks, mother-in- law Isabella (Betty) Wock, brother-in-law Duane (Theresa) Wock, sister-in-law Joyce Benz, brother-in-law Al (Andree’) Wock, sister-in-law Tammy (Mark) Shutey, and numerous nieces and nephews. Connie was a proud grandma to her five grandchildren Blayne, Tyler, Cheyenne, Coy, and Cade. She also cherished many memories spent with her favorite “sister” Shirley Willoughby. Connie is preceded in death by her parents Thomas and Violette Dunks, brother Tom Dunks, father-in-law, Nick Wock, brother-in-law and sister- in-law Bubba and Nicky Charles, and nephew Kelly Dunks. The family would like to thank Dr. James Hueftle, nurses, and staff of Pintler Family Medicine. In lieu of flowers, the family requests donations to the Ronald McDonald House Charities.

Connie Kay (Dunks) Wock, 59, peacefully passed away at home surrounded by family on June 8, 2017, after a long battle with cancer. Connie was born in Butte, MT, on September 15, 1957, to Thomas and Violette Dunks. She attended Rocker Elementary... View Obituary & Service Information

The family of Connie Kay Wock created this Life Tributes page to make it easy to share your memories.

Send flowers to the Wock family.