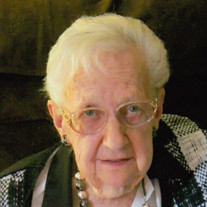 Corrine Grace Craddock peacefully passed away on Wednesday in her family home of 74 years with her daughter by her side. Corrine was born in Butte, MT to Harland and Ollie (Thomas) Sennett, on March 22, 1925. She graduated from Butte High in 1943. On June 27, 1943 she married the love of her life, William (Bill) E. Craddock, at St. Paul’s Episcopal Church. The city girl moved to the country with no running water or electricity; however, she would still get her cowboy to the city for square dancing with friends. Corrine and Bill were the proud parents of two daughters, Judy (Terry) Archer and Joyce (Ben) Arms. Together they built up their ranch properties and raised horses, cattle, sheep and pigs. Corrine was involved in many activities throughout her life such as Ramsay PTA, 4-H, and most recently the Red Hat Society and the Fairmont Wet Hens. These recent groups were particularly special to Corrine after Bill’s passing. Corrine will best be remembered for her many years of driving the Ramsay School bus. Corrine is survived by her daughter, Judy Archer of Ramsay, MT; son-in-law, Ben Arms of Ramsay, MT; three grandchildren: Dave (Janel) Archer of Buffalo, WY, Dana (Chris) Anderson of Belgrade, MT, and Tammy (Dan) Thompson of Ramsay, MT; five great-grandchildren: Tyler (Rachel) Archer of Sheridan, WY; Kendel Archer of Missoula, MT; Samantha Thompson of Scottsdale, AZ; Ashley Thompson of Butte, MT; and Garrett Anderson of Belgrade, MT; and two great-great-grandchildren: Olivia Archer of Sheridan, WY and Jaxson Thompson of Scottsdale, AZ. She is also survived by many nieces, nephews, and aunt Ona Lake of Missoula, MT. Corrine was preceded in death by her husband, William, daughter, Joyce, son-in-law, Terry, brother, sister-in-law, George and Bea Wold, and niece, Irene Mock (Wold). Special thank you to all of the caregivers, Compassus Hospice, Cy Schafer, Olive Pearce for all the frequent phone calls, and Carol Wold for bringing meals and playing music every Saturday.

Corrine Grace Craddock peacefully passed away on Wednesday in her family home of 74 years with her daughter by her side. Corrine was born in Butte, MT to Harland and Ollie (Thomas) Sennett, on March 22, 1925. She graduated from Butte High in... View Obituary & Service Information

The family of Corrine Grace Craddock created this Life Tributes page to make it easy to share your memories.

Corrine Grace Craddock peacefully passed away on Wednesday in...

Send flowers to the Craddock family.