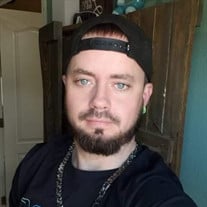 Cory Ray Hennelly-Baxter passed away Friday afternoon, October 22, 2021. He was born in Butte Sunday, December 19, 1990. Cory was raised and educated in Butte, graduating from Butte High School. He worked at Harrington Bottling Company as a service technician. He was a major gear head and passionate about the things he loved, like diesel trucks, riding his Harley, his dogs, his salt water fish and all animals and most especially his family and friends. Cory married the love of his life and his Queen, Maisa Hennelly on September 16, 2013 and she survives. Also surviving are his children, Parker Saur, Essynce Nixon, Seven McGary and Phoenixx “Boo” Nixon. Other survivors include his parents, Timothy Baxter and Tona Baxter, his sister, Kayla Hennelly, brother, Brandon (Debbie) Hennelly all of Butte, his grandmother, Arlene Hennelly also of Butte, numerous aunts, uncles and cousins and countless special friends. He is preceded in death by his grandparents, Whitey and Florence Baxter and Ed Hennelly. Cremation has taken place. A pot luck celebration of his life will be held Saturday, October 30th at 1 o’clock in the East Side Athletic Club. Everyone is asked to wear something blue and/or Harley Davidson colors in his memory. Memorial contributions in his memory may be made to the Cory’s Angel Fund at Southwest Federal Credit Union, 1925 Elizabeth Warren Avenue, Butte, MT 59701. “Don’t fear dying, fear not living. Let’s ride.” and his other famous quote “No thank you”

The family of Cory Ray Hennelly-Baxter created this Life Tributes page to make it easy to share your memories.

Send flowers to the Hennelly-Baxter family.