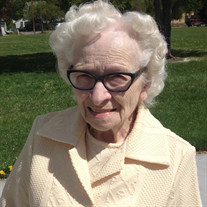 Daisy Ellen Hofbauer passed away Friday, April 3, 2020 in Florence, Montana. She was born in Ekalaka, Montana, Sunday, August 3, 1930 to Joseph and Pauline (LeGrande) Shuffield. She attended Butte schools and on New Year’s Day, January 1, 1949 she married Albert Hofbauer in the Presbyterian Church here in Butte. Daisy was a bookkeeper at the Animal Hospital for many years until going to work for Lyon’s Motors from which she retired. She was an active member and Past Worthy Matron of Ruth Chapter # 2, Order of the Eastern Star and a member of the First Christian Church and a proud member of the community of Butte. She is preceded in death by her husband, Albert Hofbauer who passed away in 2009, her son, Paul Hofbauer in 2019, one sister and three brothers. Survivors include her daughter-in-law, Brenda Hofbauer, son and daughter-in-law, Patrick and Shawna Hofbauer all of Florence, Montana, daughter and son-in-law, Allyson and Omar Abu-Hajar of Columbus, Ohio, grandchildren, Candice and Todd Roberts, Camron and Teela Hofbauer, Julie Hofbauer, Jason Hofbauer, Hanna Fayz, Noah and Aisha Abu-Hajar, three great-grandchildren and one great-great-grandchild. Daisy’s remains are in Wayrynen-Richards Funeral Home and private burial will take place in Sunset Memorial Park. A public memorial service will be conducted at a later date and will be announced.

The family of Daisy Ellen Hofbauer created this Life Tributes page to make it easy to share your memories.

Send flowers to the Hofbauer family.