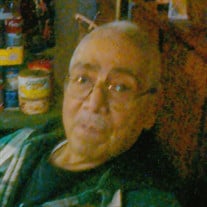 Mr. Daniel John Aguilar passed away Monday morning at his home in Butte. He was born in Butte November 20, 1934 to Juan and Petra (Ortega) Aguilar and attended local schools. Daniel married the love of his life, Havre native Mary Rita Valladolid in Butte on May 7, 1952 and together they worked very hard to raise their six children. Daniel worked most of his life in the mines in Butte until retiring and then went to work at the Berkeley Pit for open pit mining. Dan thoroughly enjoyed his family and readily took over after mom's passing. Babysitting, picking up and or dropping off to preschool, grade school, and yes even high school. Shopping for school clothes, diapers and Birthday gifts became his ritual. Dad enjoyed nothing more than sitting in his chair with his eyes closed holding a baby and listening to the kids play at his feet or play on the trampoline, ride their bikes, and play basketball or football (that includes the girls). He wanted nothing else to have a happy house full of his grand kids! Dan was the sole survivor of his generation of his brothers and sisters, marking the start of a new generation! He is preceded in death by his parents Juan and Petra (Ortega) Aguilar, his wife, Mary Rita who passed away January 21, 1999 and his granddaughter, Brianne Marie Parr who passed away in1994. Also preceded in death were Dan's brother Jay Ace Acebedo of Butte, sister Lula Martinez of Portland OR, sister Beda Leyba of Butte, brother Joe Acebedo of Butte, brother Paul "Poncho" Aguilar, sister Angelina Costello of Butte and brother Freddie Aguilar of Salt Lake City. Survivors include his only son Fredrick Dixon of California, whose children include: son Brad and Katie of Missoula, and their 2 children Sierra and Olivia. Daughter Cherese and Ronnie and their 4 children Chelsa, granddaughter Natatia, Jacquline, Brandon granddaughter Auden and Nicolas. Marcy and Ace of California and their 3 children BraeAnn Brandie and Ace Jr. and grandchildren Elizabeth, David Jr. Jaden and Zephry. Daughter Deeny and Glenn whose children include Ryan, Samantha and Taylor. Son, Justin and Roxy and their son Frederick. Dan's eldest daughter Victoria Aguilar of Butte, Toni Peters of Butte and her children Rita, Dane, Shayla and Dani and grand kids, Dreonna , McKenna, Halo and Jodi. Daughter Dee Dee Aguilar of Arlee and her daughter Devi Cole and Owen Switzer of Missoula and their 2 children, Gavin and Ellah (Bird). Daughter Debbie and Ed Newgard of Butte and their children, DJ and Kareen and their children Mason and Bridger of Butte and Preston. Daughter Dana and Wayne Parr of Butte and their children Shanna and Scott Hockaday and their children Ricco and Harlie of Butte. Debbie Lee and her children, Aljeo, Raini, Kallie and Ryder of Butte. Daughter Callie and Owen Azure of Butte and their children Mariah and Hunter. Also surviving are numerous nieces and nephews.

The family of Daniel John Aguilar created this Life Tributes page to make it easy to share your memories.

Send flowers to the Aguilar family.