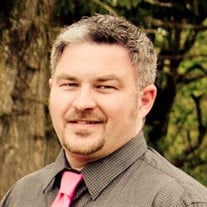 Daniel Anton Wittmer Jr. passed away Thursday evening at St. James Healthcare. He was born in Anchorage, Alaska on Thursday, June 22, 1972 to Daniel and Debra (Salvaag) Wittmer. He was raised in Huntley Project, attended high school there and received his Bachelor’s Degree in electrical engineering from Oregon State University. While at OSU He had the honor of working with NASA on two projects. The team’s viscosity project was tested on the Space Station. He also had the honor of twice doing testing on the Vomit Comet. He served his country in the United States Air Force, was a PADI certified Scuba Diver and was working for Northwestern Energy here in Butte. Dan was “water crazy”, had worked as a whitewater rafting guide and was fascinated with the Pacific Ocean. His favorite holiday was Christmas and loved anything to do with Christmas. Dan is survived by his partner of 22 years, Michael Petley of Butte, parents, Dan and Debbie Wittmer of Huntley, Montana, brothers and sisters-in-law: Micheal Wittmer of Huntley, Aaron and Jodi Wittmer of Havre, Stephan and Marie Wittmer of Camas, Washington, grandmother, Magdalina Wittmer of Fromberg, Montana, nieces and nephews, Benton and Payson Wittmer, Nathan Kordenat and MacKenzie Wittmer as well as numerous other nieces, nephews, aunts, uncles and cousins and many special friends. He is preceded in death by his grandparents Vernon and Mary Salvaag, Reinhold Wittmer and aunt Verna Fairlee.

The family of Daniel Anton Wittmer Jr. created this Life Tributes page to make it easy to share your memories.

Send flowers to the Wittmer family.