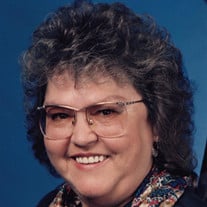 Darlene Elizabeth Ballensky passed away unexpectedly Monday morning at St. James Healthcare. She was born in Butte Friday, November 26, 1943 to William and Elizabeth (Goyette) Roberts and attended local schools. She and Edwin Ballensky were married on March 13, 1967 in Coeur D’ Alene, Idaho. Darlene was a member of Mountain View Methodist Church and the Silver Leaf Rebekah's. She was one of those people who never met a stranger and could strike up a conversation with anyone, a real people person! She worked as a bookkeeper at several Butte businesses including Anderson Steele, Mick O’Brien’s Used Cars, and St. James Hospital. She enjoyed crocheting and made afghans for many of her family and friends. Darlene is survived by her husband, Edwin Ballensky of Butte, sons and daughters-in-law, Todd and Zena Ballensky of Buckeye, AZ and William Edward and Ann Ballensky of Muscatine, Iowa, daughter, Kimberly Ballensky of Butte, seven grandchildren, brothers and sisters-in-law, William and Delores Roberts and Danny and Kim Roberts all of Butte, sisters and brother-in-law, Susan Roberts of Nebraska and Helen and Russ Whindon of Kent, WA. Also surviving are her sisters-in-law and brothers-in-law: Eldora and Ted Easterday of Butte, Mabel and Bernie Fertch of Butte, LeRoy and Donna Ballensky of Las Vegas, Gary and Denise Ballensky of Coeur D’ Alene, ID, Gail and Pete Andrich of Post Falls, ID, Jeanette Ballensky of Las Vegas and numerous nieces and nephews. Besides her parents, she is preceded in death by her brother-in-law, Larry Ballensky and sister-in-law, Florence Nerbonne.

The family of Darlene Elizabeth Ballensky created this Life Tributes page to make it easy to share your memories.

Send flowers to the Ballensky family.