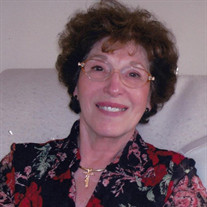 Butte Montana resident Darlene Elizabeth Berube, 90 passed away at home on Sunday May 23, 2021. She was born October 27, 1930 in Castlewood, SD to Nicholas and Theresa Hurkes. Darlene was the youngest of her siblings of four girls and one boy. Darlene’s family relocated to Butte, MT when she was a small child. Darlene will be remembered by her adventurous spirit and creative hands. She loved to oil paint, bake, sew, form ceramics and make stained glass. You could often find her tending to her outside garden and her unique touch was her white quartz. She never allowed her late husband, Fred, to pass one up when she saw one on the side of the road. Her home was always filled with photos of her five children, extended family and many grandchildren. Darlene was an active member of the Holy Spirit Parish, head of the camera department at Woolworth’s, and had many responsibilities within the school district. In retirement she enjoyed learning bridge, and was a member of the Women’s PEO. She cherished the many, many friends she made along the way. At the lakes or while camping she was always helping and caring for her grandchildren. Darlene often surprised her family. She decided to learn knee boarding behind a boat at the age of 60, helped her son dress and drag an elk out of the wild in her 70’s, traveled the world in her 80’s and drove us all nuts in her 90’s. All who knew her appreciated her quick-witted sense of humor and exuberant personality. Her husband, Dan, helped to ignite her adventurous soul by traveling the world beside her. Darlene married her first husband Fredrick E. Panion June 11, 1950. She then focused on creating a home for her new husband and future family. Fred was a hard working and loyal husband, a great father and entirely devoted to Darlene and the children they raised. She lost him January 4, 2000 shortly before their 50th anniversary. Darlene became acquainted with Daniel T. Berube in 2001, who also was a widowed parish member. They had been politely introduced by another member who knew them both. The acquaintanceship ripened to love and they were married on August 25, 2001. Nothing could ever replace the love she gave her children and grandchildren. She was their teacher, their glue, and their guide. Her spirit will remain with all of them forever. She was always so beautiful and elegant in her speech and appearance. She was steadfast and nurturing; a true lady and our family rock. She will be dearly missed and forever in our hearts. Darlene is survived by her husband, Daniel T. Berube, her 5 children from her first husband; Son Frederick (Carol) Panion {grandchildren: Jamie (Tony) Leyba, Tracy (Christopher) Wolsifer, Francis Panion, Tammy Panion} Daughter’s; Darlene Hart {Rachel Hart (Matt Young), Heather (Eric) Brown}, Danene (Marty) Petritz {Marty Petritz (Mallory Novack), Bridgett Petritz}; Donnell (Daniel) Kuchtyn {Chelsie Jolley (Esther Neu), Matessa Kuchtyn, Karissa Kuchtyn}; and son John Panion {Jonathan Panion, Elizabeth Panion, Keturah Erickson}; Stepdaughter Martha Berube (Josephine Ziaya), Stepsons; Thomas Berube; Robert Berube (Billi McCullough) {William Berube, John Berube, Connor Berube}; many great grandchildren, great great grandchildren and nieces and nephews. She was preceded in death by first husband Fredrick E. Panion, sister’s Frances Hodge, Delores Dorn, Esther Allen and brother Robert Hurkes. Services will be held June 1st 2021 at Holy Spirit Church. Visitation will begin at 10AM. Memorials may be made to the American Cancer Society or the Shrine Hospital for Children.

Butte Montana resident Darlene Elizabeth Berube, 90 passed away at home on Sunday May 23, 2021. She was born October 27, 1930 in Castlewood, SD to Nicholas and Theresa Hurkes. Darlene was the youngest of her siblings of four girls and one... View Obituary & Service Information

The family of Darlene Elizabeth (Hurkes) Panion Berube created this Life Tributes page to make it easy to share your memories.

Send flowers to the Berube family.