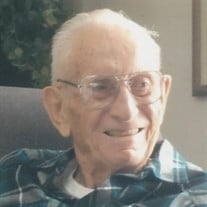 David C. Johns, a 4th generation Montanan, died March 22 surrounded by loved ones. He was born August 2, 1923, in Great Falls, Mt. to Frances and Rose Johns and was raised in Helena, Mt. Dave enlisted and served in the U.S. Navy during World War II on the U.S.S. Kula Gulf where he was among the first trained specialists in the then new technology-radar. During his military Christmas leave in 1943 he became engaged to his high school sweetheart, Edith Schuyler, and they married in 1945 in Portland, Or. Following his honorable discharge, Dave earned his B.S. and Master’s Degree in engineering from Montana State university in Bozeman, Mt. Recruited by the Montana Power Company, Dave progressed and worked in Great Falls, Livingston, Havre, and Missoula until his transfer to Corporate HQ in Butte in 1961. MPC selected him to attend the Advanced Management Course at the Harvard School of Business. He retired as Manager of Division Operations and Budget at age 62, in order to devote more time to his family and community volunteer work. Dave was an active member of the Kiwanis and the Butte Exchange Club. He was recruited by Governor Stan Stephens (1989) to serve on the Montana Historical Society in Helena for the 100 years Centennial Program. With his friends, Ray Howe, and later, Dick Skates, Dave devoted his efforts for 32 1/2years to building and developing the world Museum of Mining, serving as its president until 1993. He resigned from the Museum and with his wife, Edie, enjoyed exploring the Northwest and Southwest in their RV for years until macular degeneration damaged his eyesight. Dave became a carousel horse carver and served as an active board member for The Spirit of Columbia Gardens Carousel until his death. His friends and family will remember and greatly miss his kindness, generosity, work ethic, sense of humor, and dedication to community service. His parents, his wife, Edith, and his beloved daughters, Shirlee Johns, and Constance Johns, preceded him in death. Survivors include his daughter Sue Kavran of Dillon and her husband Ed, granddaughter Kendra Kavran (Steve Lapierre) Dillon, grandson Eddie Kavran (Heather) Billings, great-granddaughters Skylar and Brynn Lapierre, and Morgan and Mielle Kavran, and very special friends, Hazel and Axestone Duddy. Memorials may be made to The Spirit of Columbia Gardens, The Beaverhead Animal Shelter of Dillon, or a charity of the donor's choice. "If love could have saved him, he would have lived forever."

David C. Johns, a 4th generation Montanan, died March 22 surrounded by loved ones. He was born August 2, 1923, in Great Falls, Mt. to Frances and Rose Johns and was raised in Helena, Mt. Dave enlisted and served in the U.S. Navy during World... View Obituary & Service Information

The family of David C. Johns created this Life Tributes page to make it easy to share your memories.

Send flowers to the Johns family.