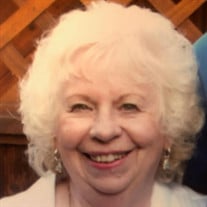 Delores (Kelley) Vavas, 86, passed away at St. James Hospital on Friday, October 18th. Delores was born to Margaret Constantine and Roy Kelley, on April 24, 1933; a companion to little brothers Roy and Bob, and later joined by brothers Jimmy and Billy. Delores was born, raised and educated in Butte, her beloved hometown. She worked at the BLM as a Clerk-Typist and worked her way up through the ranks to become head of her department. She retired after 25 years of service. She was married in a traditional Greek wedding to Aleck Vavas and they were blessed with 3 children; Alecka, Cheryl and Robert. Marrying into her husband’s large, Greek family was the joy of her life and she was the center of all Greek occasions with Al’s father, John and mother, Helen, and the entire family. She felt she lived at the most glorious time to be alive. The century of centuries. Delores was preceded in death by her mother and father, Margaret Constantine and Roy Kelley; husband Aleck Vavas; daughter Cheryl Vavas; brothers Roy Kelley and Bill Constantine; and grand-daughter Dana Vavas. She is survived by her daughter, Alecka Madden and son-in-law, Dan Madden of Worland, Wyoming; her son, Robert (Teri) of St. George, Utah; her brothers, Robert (Claudia) Kelley of Tucson, Arizona; Jim (Kristie) Constantine of Butte, Montana and many grandchildren and great-grandchildren. “See you all upstairs in paradise! Maybe with a little Greek dancing and some baklava too, in celebration of a memorable time and life and to meet departed loved ones again. Praise the Lord.” – Delores Vavas The funeral will be held at Wayrynen-Richards Funeral Home at 10 a.m. on Wednesday, October 23rd. Entombment will follow at Mountain View Cemetery, with a luncheon being served at the funeral home after. In lieu of flowers, memorials may be made to the Breast Cancer Research Foundation.

The family of Delores Kelley Vavas created this Life Tributes page to make it easy to share your memories.

Send flowers to the Vavas family.