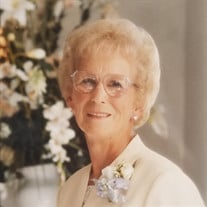 Dolores Frances Ibsen Osier, age 91, passed away peacefully at the Big Sky Senior Assisted Living Center. She was born January 19th, 1928 in Kenosha, Wisconsin to Lars Ibsen and Esther Barth-Ibsen, whom also had a son, brother of Dolores, Richard (Dick) Ibsen. Several years later, Lars passed away and Esther moved her family to Montana. Esther then met and remarried her husband, Elmer Janovic, whom helped raise Dolores and Richard. Dolores attended Sherman School and graduated from Butte High in 1946. Two days after graduation, she went to work at Fort Harrison in Helena, MT as a Service Officer where she met the love of her life, Ernest (Ernie) Osier. Ernest was in the Navy and received Asiatic Pacific Area Campaign Medal & World War II Victory Medal and was honorably discharged. When Ernest returned from active duty, he married Dolores, June 7th, 1947 in Butte, MT and they made Butte their home. They lived in Walkerville and later moved to the flats where they bought property and a house. They then had two children, Randall (Randy) & Linda. Dolores went to work at Sweetheart Bakery for 23 years where she eventually retired from. Ernie and Dolores were a happy, loving couple that enjoyed many activities together which included dancing on the weekends, playing card games, and camping with their grandchildren. They often went for afternoon drives to Anaconda & ate at the Anaconda Supper Club. Ernie & Dolores planned and looked forward to their retirement together. This plan was cut short as Ernie was diagnosed with Leukemia and became very ill. Dolores nursed & took care of him during this difficult time. He held onto life so that he could see his great-granddaughter, Alyssa be born and he passed away two months later. Dolores was a very caring wife and Ernie was the love of her life. After retiring from Sweetheart Bakery, she found her passion for golfing and joined a golfing league. You could find her every weekend on the golf course in her pink golf cart and she used to talk about how her golfing acquaintances said she had the best Barbie Cart out there. She also bowled with Senior League at King Pin, and played Bridge on Friday's with her lady friends. She had many friends and was very active in her retirement years. Her grandchildren often joked they had to make an appointment to see her when they came to town and if they couldn't find her at home, they knew they could find her down at one of her favorite casinos playing Keno. She was a social butterfly and enjoyed her life to the fullest. Dolores was a beautiful soul and made everyone feel loved. She was preceded in death by her husband, Ernest Osier; parents, Elmer & Esther Janovic; her brother, Dick Ibsen; son, Randy Osier and daughter, Linda Lubick; as well as several brothers and sisters-in-law on the Osier side. Surviving relatives are son-in-law, Tom Lubick of Butte, MT; daughter-in-law, Dina Wise-Osier of Rock Springs WY; grandchildren: Nicole Lubick & Lisa Lubick-Patton of Belgrade, MT, Chad & his wife Kaci Osier of Cheyenne, WY, Ashley Osier & her husband Matt Olson of Liberal, Kansas, Melissa Beckstead of Spokane, WA, Tracie Jenkins of Rock Springs, WY, Jeremy Epps, Melissa Goff, Crystal Peel, all of WY; great-grandkids, Alyssa Winstead, Randall Joseph Osier, Maddox Maximus Osier, Nataly Osier, Destiny Olson, Kora Olson, Jayden, Donovan, Aris, Leo, Jasmine, Selena, Bowdie, Kaitlynn; niece, Alice & Jeremy Wichman of Illinois; and several other nieces and relatives on Ernie Osier’s side.

The family of Dolores Frances Osier created this Life Tributes page to make it easy to share your memories.

Send flowers to the Osier family.