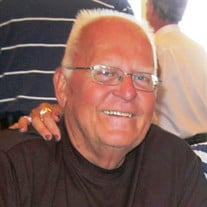 Don Hubacka passed away peacefully at his home Easter Sunday surrounded by his family and friends. He was born in Butte January 5, 1937 to Larry and Agnes (Hakki) Hubacka. He attended local schools and following graduation from Butte High School started his long carpentry career sharing his talent with Butte and the surrounding area for many years. Don married Sherrie Dugdale on March 23, 1962 and together they had three daughters. Sherrie passed away November 6, 2000 and on March 15, 2003 Don married to Sharon Bond, combining their families. Don was a loving husband and father, a devoted son, and a talented carpenter who enjoyed stained glass and computers. Following his retirement he and Sharon enjoyed traveling to exotic places including Fiji, Australia and Mexico. They were snowbirds, wintering in Palm Springs, California where they spend beautiful days together on the golf course. Don was an avid Griz fan, and enjoyed attending as many games as possible with all his season ticket holder friends. He was a member of the Butte Elks lodge, B.P.O.E. # 240 and past president of the Butte Lions Club. He was the king of the Bar-b-que, and enjoyed his collection of amusing t-shirts. Besides his first wife, Sherrie, Don is preceded in death by his father Larry Hubacka and Sherrie's father, Fred Dugdale. He is survived by his wife, Sharon, his mother, Agnes Kindt, mother-in-law, Erma Dugdale, all of Butte, his daughters and son-in-law, Lori and Doug Rosencrans of Snohomish, WA, Wendi Hubacka of Scottsdale, AZ and Cindi Haller of Kenmore, WA, Sharon's children: Mark and Judy Bond of Butte, Jill and Dan Sampson of Helena, Kirk and Robyn Bond of Australia, grandchildren: Brandon and Christina Rosencrans, Abby and Shaylen Haller, Brooke, Riley, Evan and Shea Sampson, Kelly, Brett, Kacy and Brock Bond, Jamie and Bobby Bond and his step-sister, Debra Kindt and sister- in-law, Kathy and Ed Decker of Butte.

Don Hubacka passed away peacefully at his home Easter Sunday surrounded by his family and friends. He was born in Butte January 5, 1937 to Larry and Agnes (Hakki) Hubacka. He attended local schools and following graduation from Butte High... View Obituary & Service Information

The family of Donald L. Hubacka created this Life Tributes page to make it easy to share your memories.

Don Hubacka passed away peacefully at his home Easter Sunday...

Send flowers to the Hubacka family.