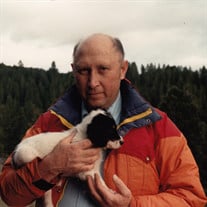 Dr. Donald James "Don" O'Neill DDS passed away at his home. His wish was granted, as he always wanted to die in his beloved home he designed and built. Don was born in May 10, 1939 to Harry "Speedy" and Rose (Casick) O'Neill. He was the center of his parents life and they loved their son, Don, dearly. Don attended Butte Schools: Emerson Elementary and Butte High. After graduation he attended Marquette University where he graduated with a doctorate in dentistry. Don liked music and while at Marquette he joined the dental fraternity and sang in the glee club. Throughout high school and college Don worked at various jobs in the summer and while attending college. He had a strong work ethic, giving 100% to all he did. He worked on the railroad, in the underground mines, in the pit and on construction sites in Butte. While attending Marquette he worked at a die cast factory and the Marquette Library. After graduation from dental school in 1964, Don joined the United States Air Force. He was a Captain in the dental unit assigned to Travis Air Force Base, California. After his honorable discharge in 1966 Don returned to Butte to open a dental practice in 1967 and had his dental office built on the corner of Cobban and Florence where he practiced dentistry for thirty years. Don loved dentistry and he did much of his own lab work, making crowns and bridges. He was meticulous in his dental craft. Don took several classes at Pankey Institute in Florida and also took several classed in endodontics from Clifford J. Ruddle in Santa Barbara, California. Don enjoyed doing root canals and he had a gentle touch and caring way with his patients. All of Don's life he loved the outdoors. He fished, hunted and camped with his father and friends. Don had mules and horses and he packed into back country to hunt and observe nature. He cared deeply for his mules, horses, dogs and cats he had over the years. Don also loved alpine skiing. He skied many western ski resorts and was an instructor at Z-Bar-T and Deep Creek. In late1988 Don became reacquainted with high school friend Kay (Evans) Kountz. While dating Don and Kay found they had much in common and a loving bond. They married in 1990. Don and Kay found a new love of skiing; it was cross-country and telemark skiing. They belonged to the Mile High Nordic Ski Club. Don and Kay fished, hiked, camped, floated the Big Hole and mountain biked. Don built a three porthole pygmy sea kayak. With their dog, Kit, they paddled the Missouri, Marias River, Gates of the Mountains, Cliff Lake, Red Rock Lakes and other mountain lakes. They were bird watchers and had several wonderful birding adventures. They were members of the Montana Audibon Society and took several classes at Yellowstone Park which they visited often. They traveled to Alaska to telemark ski on the slopes of Alyeska, flew by ski plane around Mt. McKinley to land on Ruth Glacier to observe telemark skiers and walk the glacier. In Steward they observed whales and dolphin and other sea life. Other memorable trips include Bella Coola, British Columbia to deep see fish and camp. Don and Kay were best friend, work partners and had a strong commitment and love for each other. Don developed vascular dementia and Alzheimer's and the last four years were a struggle for both of them. Above all Don was a good, compassionate man, He was passionate about his beliefs and had the strength and determination to overcome obstacles. He worked hard and was ethical. He was creative and inventive when problem solving. Don had a quick wit and a fun sense of humor. Don will be missed by his wife of 26 years, Kay Kountz O'Neill. Don was preceded in death by his parents, Harry and Rose O'Neill, several aunts and an uncle. Besides Kay, he is survived by his brothers- in-law and wife, John and Roxcee Kountz of Whitehall, MT, Paul Evans of California, sisters-in-law and their husbands, Pat Kountz and Gene Franks of Helena, Debbie Evans and Dave Lombardozzi of Fresno, CA, Linda Evans Brotherton of Burney, CA, several nieces and nephews, uncles Matt and Steve Casick of Butte and aunt-in-law, Shirley O'Neill. A special thank you to his temporary guardian and friend, Dave Wing, neuropsychologist, Dr. Loretta Bolyard, Belmont Senior Center Memories Support Group, the Springs memory support group, Southwest Community Health and their caring doctors and staff and a thank you to family , friends and professionals who gave love understanding and support. Memorials in memory of Don may be made to the Butte Search and Rescue, Butte Food Bank or to a charity of the donor's choice.

Dr. Donald James "Don" O'Neill DDS passed away at his home. His wish was granted, as he always wanted to die in his beloved home he designed and built. Don was born in May 10, 1939 to Harry "Speedy" and Rose (Casick) O'Neill. He was the... View Obituary & Service Information

The family of Dr. Donald James O'neill DDS created this Life Tributes page to make it easy to share your memories.

Send flowers to the O'neill family.