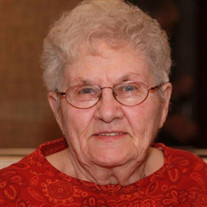 Donna L. Ericson has passed from our worldly sphere February 18, 2021 of natural causes at the age of 91. Her abundant energy, creative talent and bold ventures touched all the lives of those fortunate enough to know her – friends and family alike. Donna and her sisters, Alice Miller and Myrna Miller grew up on a farm near Radersburg, where the three sisters acquired independence and inquiring minds. Their parents Boyce and Lillian Miller were divorced in 1937, and Lil raised the girls in Butte as a single parent until Ted Beaulieu joined the young family as their step-father in June 1941. After Donna graduated from Butte High School in 1947, she started an office job and a co-worker Lillian Ericson introduced Donna to her brother George, and that was the start of her Happily-Ever-After Story. They were married in January 1951 in a small family ceremony. George and Donna designed and built their home on Edwards Street, living in the basement for 12 years until the house was completed. They had three children, Duane, Devvi and Todd. Donna created beautiful flower gardens within their property; and had a raspberry patch that was the envy of the neighborhood. Flowers still bloom in her beds. Donna worked for several insurance agencies while the kids were in school and she was an excellent typist and took dictation in short-hand; a skill you don’t see very often, and one she used until a few years ago. She was a Den Mother for the Boy Scouts, and there were always educational, creative, and adventurous den meetings and outings. Donna’s kitchen was the center of the home for the family. She was a remarkable cook and every new recipe was a success; she knew how to read a yummy one. Family gatherings were planned around a delicious menu. With her love of cooking and sense of style, Donna’s parties always provided a warm ambiance and hearty bounty for family and friends. Donna’s creative side was evident in everything she touched or put her mind to craft wise. Her home was always decorated with pieces created for every holiday. Donna was left handed but could teach her friends how to knit and smock right handed. Some of the types of hand crafts she perfected were: sewing children and doll clothes, knit, crochet, cross-stitch, embroidery, rug hooking, quilting, hardanger, pencil sketching, and smocking. Her first quilt projects were bed-sized quilts for each of her children. She has a true artisan. All these hobbies and associated friends helped her through the loss of her husband George in 1994. She was tech-savvy for a senior, and was the Newsletter Editor of “the Quill” for the Butte Quilt Guild, publishing the creative stories from their membership. Her friendships evolved thru the times, “To make a friend, you need to be a friend”, characterized Donna to a “T”. Her friendships centered around motherhood, gardening, quilting, card playing, with her round oak table being the heart of these gatherings. Donna is survived by her sister Alice Miller (Missoula); son Duane Ericson (Billings) and his wife Karen, daughter Angie, son Russell and grandsons Cameron and Chase; daughter Devvi Morgan (Kalispell); and son Todd Ericson (Butte). Donna also has nephews and nieces and their families: Greg Olsen, Eric Olsen, Kevin Olsen, Lyn Olsen, Rebecca Johnson and Kyle Olsen. Donna was a resident of the Crest Nursing Home for the last two and a half years, where she was treated kindly and with respect. Donna passed along a life well lived, filled with joy, beauty and love. Donna will be missed, but never forgotten. Our Center of the Universe is now in Heaven. There will be a small celebration of her life at a later date when family can gather. In lieu of flowers, Donna would have asked that you simply make a contribution to a local charity or non-profit of your choice.

Donna L. Ericson has passed from our worldly sphere February 18, 2021 of natural causes at the age of 91. Her abundant energy, creative talent and bold ventures touched all the lives of those fortunate enough to know her &#8211; friends and... View Obituary & Service Information

The family of Donna Lou Ericson created this Life Tributes page to make it easy to share your memories.

Donna L. Ericson has passed from our worldly sphere February...

Send flowers to the Ericson family.