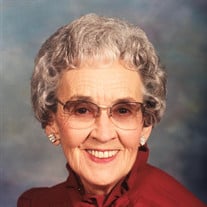 Dorothy Forsell, 95 July 24, 1924-May 2, 2020 Dorothy Forsell took her last breath listening to music on Saturday, May 2, 2020, shortly before noon. Dorothy Mae was born in Independence, Missouri, on July 24, 1924, to Joe and Mary (Toth) Ponack (shortened from Serbian Potkonjak). Nine months later, they packed their new car and moved to bustling Butte, arriving during a snowstorm, Dorothy sick with whooping cough. Joe was a miner and later a barber with shops on Wyoming, then East Park Street. The family settled in McQueen on Willow Street, and at age 2 Dorothy met her lifelong friends, Mary Petritz, who lived next door, and Elaine Hosking, who lived across the alley on Hazel. After first grade at Franklin School, Dorothy moved to 2255 Hickory Street in East Butte, where the family lived until Dorothy’s eighth-grade graduation from Harrison School. Her freshman year, they lived in the Amos Flats, 932 E. Mercury, and then they moved to 122 S. Warren. Dorothy shared fond memories of East Butte backyard gardens and riding the street cars and the Dinky to the movie theaters and candy stores Uptown. She graduated from Butte High in 1941 and went right to work – first at Western Plumbing and Electric, a little later as secretary to the president of Hennessy’s. She loved office work, including at Cooney Brokerage, Hall-Perry, Jimmy Shea Insurance, Don Ulrich Insurance, and finally retiring from FNI Insurance in 1982. She met her future husband, Bob Forsell, while working at Gamer’s Shoe Store with Bob’s uncle, Freddy Pfaff. They married on January 20, 1946, a union lasting 48 years until his death in 1994. Love of dancing brought them together, and they spent many happy evenings at the Elks. They also loved to bowl and play cards. Bob built the family home at 2011 Carolina, and Dorothy was happiest when her kitchen table was full of family and friends playing games or sharing meals. She remained there until 2015, enjoying her views of the rising moon and Our Lady of the Rockies. Dorothy belonged to the Copper City Women’s Club, the Carpenters Union Ladies Auxiliary, and prayer groups at St. John the Evangelist Catholic Church, where she also volunteered after retirement. In addition, she was on the organizing committee for all of her high school class reunions. Survivors include daughters, Arlette Chew, Pat (Dick) Wright, and Bobbi (Mark) Stauffer; grandchildren, Robert (Samanthika) Tate, Kristin (Kevin) Cullen, Whitney (fiancé Zach) Wright, Taylor (Bryce) Foley, and Dylan and Lauren Stauffer; great-grandsons, Mason Tate, Konrad and Keaton Cullen, and Carter Foley; sister, Nadine Langan, and many nieces and nephews. Besides her parents and husband, she was pre-deceased by in-laws, Morgan Langan, Adeline and Albert “Swede” Forsell, Jim Forsell, and Barbara and Bill Lehfeldt, and her second long-time dancing partner, Barney Petrich. The family is grateful for the staff at The Springs, where Dorothy lived independently these last five years, with special thanks to Cherie and Andrew. Sadly, due to COVID-19, only private family services will be held. Memorials may be made to the Spirit of Columbia Gardens Carousel. Dorothy was so happy she got to enjoy several rides!

The family of Dorothy M. Forsell created this Life Tributes page to make it easy to share your memories.

Send flowers to the Forsell family.