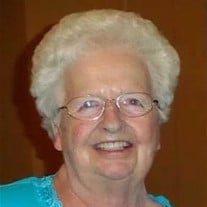 On Tuesday, December 26th, 2017 at the age of 79, I answered God’s call to come home. I am home in Heaven, dear ones; Oh, so happy and so bright! There is perfect joy and beauty in this everlasting light. Dottie was born to John and Doris Kruger in Anaconda, Montana on March 26th, 1938. The family moved to Butte in 1943 where she attended St. Ann’s School. She graduated from Girls Central High School in 1956. Dottie married Hubert “Tubie” Johnson Jr. on June 27th, 1959. They had five children, Paula, Brenda, Michael, Rhonda and Lori Ann. Dottie worked for her grandfather at S.J. Perry Plumbing and then went on to work as a bookkeeper for Roseburg’s Furniture Store. In 1969, she decided to become an entrepreneur and started “Johnson’s Wedding Service” which made wedding dreams come true for countless couples over the years. This also allowed Dottie the flexibility to focus on her children, and she was their biggest cheerleader. She attended all of their games, music recitals and plays. She made 17 trips a week in the well known Volkswagen van to the YMCA for bowling, swimming, diving, and gymnastics lessons. She donated what little time she had back to the community by being a leader for Bluebirds and the Camp Fire Girls, as well as coaching volleyball. Her greatest joy was her grandchildren. She was very skilled at Nintendo and taught them all how to play. She encouraged them to use their imaginations, reach for the stars and live their dreams. She was a member of the Butte Venture Club, the Daughters of the American Revolution (DAR), and a volunteer for the Lady of the Rockies dedicating over 22 years of service. Dottie was very devoted to Saint Ann’s Catholic Church participating in Cursillo movements, the Prison ministry, Eucharistic ministry, Lay ministry, Healing ministry and attended the Deacon program with her husband. She was a fantastic chef, enjoyed bowling, golf, ceramics, macramé, learning Spanish, as well as beautifying her yard. She loved attending 8:00 a.m. mass on Sundays and then going to breakfast with friends. Throughout 1978 and 1979, Dottie and Tubie were host parents for 45 foreign students who were attending Montana Tech. To this day they still call her mom. Dottie is survived by her five children, Paula, Brenda, Michael, Rhonda (Doug), Lori Ann (Bill), along with her siblings: Raymond (Charlotte), Robert (Carol), Mary (Dick), and Kathryn (Glen), as well as her grandchildren: Alisha, Sarah, Randi, Alexa, Matdysen, Briana, David and Johnny. She was preceded in death by her parents, husband, brother Paul and nephew Paul.

On Tuesday, December 26th, 2017 at the age of 79, I answered God&#8217;s call to come home. I am home in Heaven, dear ones; Oh, so happy and so bright! There is perfect joy and beauty in this everlasting light. Dottie was born to John and Doris... View Obituary & Service Information

The family of Dorothy Faye "Dottie" Johnson created this Life Tributes page to make it easy to share your memories.

Send flowers to the Johnson family.