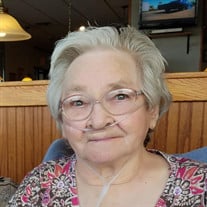 OBITUARY MATERIAL FOR Dorothy Lucille (Perkins) Stone, 93 May 8, 1926 – April 22, 2020 Dorothy was born and raised in Deer Lodge, MT on May 8, 1926 to John E. and Elizabeth (Snell) Perkins. She grew up on the Perkins Ranch south of town with her three brothers and five sisters. Dorothy was very active on the ranch working just about everywhere she was needed. At the age of 17 she met and married Robert Stone of Anaconda, together they moved and lived just a little farther down Dempsey Creek from her mom and dad. Except for a brief stint working at the Galen Hospital Dorothy stayed home and raised four children and worked their family farm until moving to Lost Creek in 1997. Bob and Dorothy led very active lives camping all around Montana, snowmobiling to the Dempsey Lakes, looking after grandchildren, and visiting friends far and wide. Dorothy was a hardworking woman her entire life, tending garden, raising kids, and keeping her family together thru WW II and many other difficult times. She was always one to open her home, whether it was for family, foster kids or anyone else in need. She enjoyed crocheting, reading, canning, ceramics and could often be found baking or taking on some other task. Never one to say no to a project whether it was painting her entire house well into her 80s or rearranging her furniture at the rest home, she found a way and was not shy about roping in anyone lucky enough to be around to help. Dorothy was preceded in death by her husband of 68 years Robert S Stone Sr, brothers: Ernest, Clifford, and Jack Perkins, sisters: Grace Sullivan, Emma Tamcke, Mae Risch, Lois Stav, and June Wallace. She is survived by her four children: Robert (Ada) Stone, Tim (Cathy) Stone, Ken (Jan) Stone, and Jeanne Stone; 10 grandchildren, and numerous great grandchildren. Dorothy has been cremated. As per her wishes a celebration of life will be held later this summer at the Perkins Ranch in honor of her husband, sisters, and anyone else we have lost. Memorials in her memory may be made to the Anaconda Nursing Home. Details will be announced after life returns to a semblance of normal.

The family of Dorothy Lucille Stone created this Life Tributes page to make it easy to share your memories.

Send flowers to the Stone family.