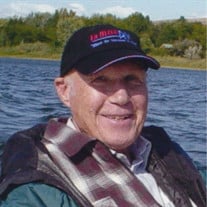 Mr. Earl Raymond Williams passed away unexpectedly Wednesday morning at his home in Butte. He lived life to the fullest right to the very last moment, as he had just returned home from his weekly breakfast outing with friends, and his summer had been filled with family camping and jeep trips. He was born in Minot, North Dakota November 19, 1935 to Roy Archie and Gladys Marie (Mork) Williams. He grew up on the family farm in North Dakota and graduated from Des Lacs High School in 1953. He receive an Associate’s Degree from LeTourneau Technical Institute of Texas in 1955 and a Bachelor’s Degree in civil engineering from the North Dakota Agricultural College in 1958. He also served his country in the United States Army at Fort Ord, California and as a Reservist from 1959 until 1966. Earl worked for the United States Forest Service as a civil engineer and retired in 1995 after 37 years of service. He was an avid outdoorsman and enjoyed fishing, hunting, camping, four wheeling and Jeep exploration. He was a member of the Montana Trails Association, the National Rifle Association and also had a passion and talent for woodworking passed on from his father. Earl and Margaret “Peggy” Rosecrans were married in Butte in 1967 until 1988, and together raised nine children. He is preceded in death by his parents and his older brother, Gary Williams who passed away as a child. Survivors include his longtime friend, Nancy Barker of Salmon, Idaho, with whom he enjoyed many snowbirding winters in Arizona and other memorable times. Also surviving are his children and their spouses: Kathleen and Brian Woodward of Whitefish, Tim and Belinda Williams of Round Rock, Texas, Meg Williams of Gillette, Wyoming, Mary Jo and Pat Harmon of Chester, Karen “Koko” Williams of Colorado Springs, Colorado, Gary Williams of Gillette, Steve “Beaver” and Lori Williams of Gillette, Brian and Nelly Williams of Gillette and Nicholas Williams of Austin, Texas. Surviving grandchildren are: Trevor Woodward, Josie and Harrison Williams, Haley, Troy, Korrin, Kyle and Blake Harmon, Garrity Williams and Kylee Williams. His cousin, Terrie and her husband Alan Lee and family of Berthold, North Dakota also survive. Dad and Grandpa Earl will be greatly missed, but he left many wonderful memories behind for all to continue to enjoy.

Mr. Earl Raymond Williams passed away unexpectedly Wednesday morning at his home in Butte. He lived life to the fullest right to the very last moment, as he had just returned home from his weekly breakfast outing with friends, and his summer... View Obituary & Service Information

The family of Mr. Earl Raymond Williams created this Life Tributes page to make it easy to share your memories.