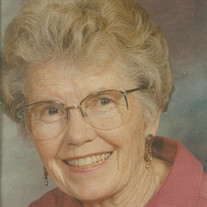 Edith Davenport passed away May 31, 2015 in St. James Healthcare. She was born in Valley City, North Dakota November 9, 1922 and attended high school in Tower City, ND. She completed a 2-year curriculum in elementary education at Minnesota State Teachers' College in Moorhead in May, 1942. After graduation, she and her older sister migrated west to Bozeman, where Edith accepted a 5-year 4th grade teaching position at Irving School. In Bozeman, she met navy officer and engineering student Richard Davenport. They were married June 12,1948 in Darby, Montana. She then taught for a year in Great Falls, before moving to Lewistown for Richard's work with Montana Power. She completed her 4-year teaching certificate at the University of Montana and at the School of Mines while her children were small. The Montana Power job eventually moved the family to Butte in 1959, and here they stayed, loving the community and the friendships they found here. Edith taught in the Butte school system for 13 years and was known to many children, grades 2 - 4, at Whittier and at Monroe Elementary. Edith was an active member of PEO, the Daughters of Norway, the Daughters of the American Revolution, and the Butte Garden Club, continuing to be active until her final weeks. She was a lifelong learner and an avid gardener. She will be greatly missed by her daughter Susan Bourdet and husband Jim, son Philip Davenport and wife Charlotte, grandchildren Rachael, Daniel, Valorie and Brad, and great-grandson, Roen. Memorials in Edith's honor can be given to Habitat for Humanity.

Edith Davenport passed away May 31, 2015 in St. James Healthcare. She was born in Valley City, North Dakota November 9, 1922 and attended high school in Tower City, ND. She completed a 2-year curriculum in elementary education at Minnesota... View Obituary & Service Information

The family of Edith L. Davenport created this Life Tributes page to make it easy to share your memories.

Send flowers to the Davenport family.