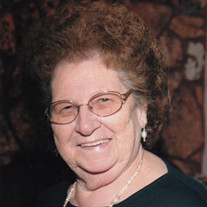 Edith Caroline Oswald passed on May 7, 2O21, one day after her 95th birthday. Edie was able to remain at home with her husband over the past five years as she battled Alzheimer’s disease and lung cancer with the wonderful supportive care of Senior Solutions Hospice. David and Elizabeth Allenbaugh welcomed their youngest daughter Edith Caroline to their large family on May 6, 1926, in Punxsutawney, PA. Edie met her husband, Wesley, in PA and stated she knew he was the one at first sight. They moved to Butte in August of 1955. Edie and Wes raised children Randolyn, Gerald, Kevin, and Tamra. Edie and Wes celebrated their 76th wedding anniversary on April 23rd as well as Wes' 100th birthday. Edie loved to learn and going to school. Unfortunately, her mother died when Edie was only 13 years old and she had to quit school to run the household for her father. Not getting a formal education did not stop her, however. She loved to read, do puzzles and crosswords, and learned bookkeeping from her good friend, Chloe Gilman. She learned to paint, do ceramics, quilt, and sew. She worked as an artist for her cousin Jack Atcheson, Sr. at his taxidermy shop before she retired. Camping, hiking, fishing, hunting, bowling, and snowmobiling were frequent activities in the Oswald household. She loved racing around in her cars which included a 1969 Camaro Rallysport, a 1976 Chevy truck, and finally a 1996 Yukon. She even raced Ron Long's stock car in the Powder Puff Division at the Butana Speedway. She always swore that we would have to pry the keys from her cold dead hands before she gave up driving, so "mechanical issues" stopped her. Edie had a very mothering spirit. She helped care for her niece, Carol Lee Waitkus, when she was a child and they remained extremely close. She and her cousin, Jack Atcheson, Sr., were best friends. Jack often accused her of throwing him out of the hay loft. She was also a surrogate mother and grandmother to LaRae and Rick South and their children Trevor, Trace, and Shelby. She was so proud to attend their school and sporting events. Over the last two decades, Edie was a member of the Gal-Us-Frame Gals where she and the other Red-Hat ladies tore up the town. There are many Butte residents who have shared a hug and a laugh with Edie. Edie was preceded in death by her daughter and grandson, Randolyn and Scott Korn, son Kevin Oswald, as well as many siblings and other family members which include these Montana residents: Arthur and Dora Atcheson, Jack (Mary Claire) Atcheson, Sr., Patty, (Charles)Tim and Kim Andersen, Phyllis Atcheson Best Richard and Evelyn Beers, Ron and Patty Long, Ruth and Phillip Lyons, Louis and Ann Allenbaugh, Marge (Robert)Oswald, and good friend Chloe (James) Gilman. She is survived by her husband Wesley, son Gerald and Lois Oswald, daughter Tamra Oswald, brother-in-law Robert and Dee Oswald, grandchildren Michelle (Scott) Korn, Beth Kramer, Yanci Oswald, Angela Phippen, Jenny Oswald, Kenny Oswald, many great-great grandchildren, and many cousins, nieces and nephews. Edie’s remains are in Wayrynen-Richards Funeral Home where funeral services will be conducted Friday morning at 10 o’clock with Deacon Dan McGrath officiating. Interment will be in Sunset Memorial Park and a reception will follow in Wayrynen-Richards Community Center. Express condolences at www.wayrynen-richards.com.

Edith Caroline Oswald passed on May 7, 2O21, one day after her 95th birthday. Edie was able to remain at home with her husband over the past five years as she battled Alzheimer&#8217;s disease and lung cancer with the wonderful supportive care... View Obituary & Service Information

The family of Edith Caroline "Edie" Oswald created this Life Tributes page to make it easy to share your memories.

Send flowers to the Oswald family.