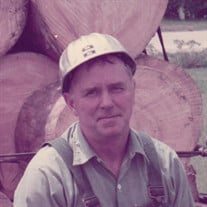 Our much-loved Dad and Papa, Edward “Lee” Danielson passed away on Wednesday, March 11, 2020, at the Bee Hive Homes in Butte. Lee was born on January 8, 1932, in Butte to Nephi and Gertrude (Leary) Danielson. He attended Emerson Grade School and Butte High School. Lee met his future wife, Joyce (Lavelle), at Leon and Eddie’s, where she was a car hop. They married on May 16, 1953, and had celebrated 64 years of marriage at the time of Joyce’s passing on November 20, 2017. They made their home in Butte where they raised their daughters, Connie and Mary Anne. In his younger years, Lee served in the United States Army. Once he returned to Butte, he worked for the railroad and also in the underground mines of Butte. On November 11, 1963, he started working for the Anaconda Company, where he worked as a shovel operator until Arco ceased its Butte mining operations in the early 1980s. Lee then worked as a shovel operator for Montana Resources until his retirement. Lee enjoyed woodworking, a hobby he learned from his father. He was an extraordinary craftsman, and he made many jewelry boxes, banks, desks, china cabinets, curio cabinets, rocking chairs, and picture frames – whatever we would ask him to build – all one of a kind and all of which we will treasure forever. He also designed, constructed and installed a beautiful wrought iron fence and porch rails for Mary Anne, all of which are proudly displayed at her home, and she and her children will cherish these forever. Lee also enjoyed going to the Highlands to get loads of wood to heat his workshop and the family home during the cold winters. He took his trusty 1955 green Chevy pickup on many a wood scouting trip, and he hauled (literally) tons of wood over the years. Lee was a lifelong Democrat and proud member of the Operating Engineers Union. We will never forget his sense of humor and conversations (opinions) about politics – both of which usually went hand-in-hand. Lee’s willingness to lend a helping hand to his family, relatives, friends and neighbors will be missed. Papa Lee shared a very special bond with his granddaughter and “fine girl,” Jessica. He often told the story that when he had open heart surgery when Jessica was only one week old, she was the first person he asked about when he was in the recovery room. One of Lee’s favorite pastimes was letting a young Jessica “convince” him to take her to Hastings to buy a book (actually, it was many books), and then they would go back to Gramma’s and Papa’s house to read the books together. Those outings were priceless and will be etched in memory forever. Lee was preceded in death by his wife, Joyce; his mother and father; mother- and father-in-law, George and Holida (Guay) Lavelle; his sister- and brother-in-law, Gertie and Roy Barrett; in-laws Dolores “Meanu” (John “Bake”) Panion, Lois (Mickey) Doherty, Billy (Helen) Lavelle, and Pat Lavelle; and his niece, Vonnie Kindt. Lee is survived by his daughters, Connie (Gregg) Edelen and their children, Todd (April) Edelen and Lee (Shana) Edelen; and Mary Anne Flamand and her children, Jessica Flamand and Matthew Flamand. He is also survived by great-grandchildren, Wyatt Edelen and Kymber Edelen. Also surviving Lee are his brother, Bill (Helen) Danielson, and his sister, JoAnn (Bob) McGrath, as well as numerous nieces and nephews. Our family would like to thank the wonderful, caring staff at Bee Hive Homes, who provided such loving care for our Dad and Papa. We are grateful for their never-ending kindness and compassion. We would also like to thank the staff at Frontier Hospice. At his request, no services will be held. Memorials in Lee’s memory may be made to a charity of the donor’s choice. Goodbyes are not forever, Goodbyes are not the end, They simply mean we’ll miss you, Until we meet again. Rest in eternal peace, give Gramma our love, and enjoy your new workshop. We love you, Dad and Papa!

The family of Edward Lee Danielson created this Life Tributes page to make it easy to share your memories.

Our much-loved Dad and Papa, Edward “Lee” Danielson passed away...

Send flowers to the Danielson family.