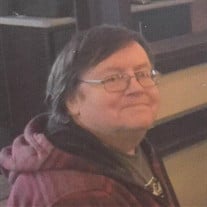 Loving son, brother and uncle, Edward Paul Drabant Jr. passed away Wednesday morning in a local hospital. Paul was born in Butte Saturday, November 23, 1957 to Edward Paul and Marlene (Killian) Drabant. He attended St. Mary’s Grade School, graduated from Butte High School and earned his teaching degree from Eastern Montana College. A Paul substitute taught for many years for the School District. Paul was a longtime parishioner at St. Patrick’s Catholic Church, was very proud of his Irish heritage and loved the Irish festivals and its music. He enjoyed crossword puzzles and bowling. He loved all sports, especially hockey, football, NASCAR racing and was an avid fan of Copper King Baseball as well as the Denver Broncos. Paul is preceded in death by his mother, Marlene Drabant and his brothers, twins, James and Michael Drabant. He is survived by his father, Edward Paul Drabant Sr., brother, Glen Drabant both of Butte, sister, Margaret Drabant of Snohomish, Washington, nephews, Darren and Bryan Drabant, great-nieces and nephews: Keira, Mattea Ayden, Neveah and Matthew Drabant as well as aunts, uncles, and several cousins. Memorials in his memory may be made to the Diabetes Association or the Kidney Foundation.

The family of Edward Paul Drabant Jr. created this Life Tributes page to make it easy to share your memories.

Send flowers to the Drabant family.