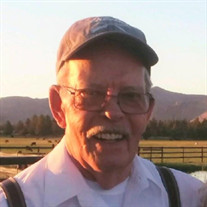 Edward Robert Fenwick passed away Friday afternoon, April 16, 2021 in Barrett Hospital and Healthcare in Dillon. He was born in Omaha, Nebraska Friday, October 19, 1945 to Charles and Geraldine (Costello) Fenwick. The family lived in several places and Edward graduated from high school in Midland, South Dakota. Edward was a heavy equipment operator and drilling and blasting foreman for companies including Montana Tunnels in Helena and Barrick Mining Company in Nevada. He was a member of the Elk’s Lodge in South Dakota. Ed was an AVID Nebraska Huskers fan and a member of the Idaho Huskers...Go Big Red! He married Betsy Tarrant in Jackson Hole, Wyoming on November 29, 2002 and together they made their home in Helena and Caldwell, Idaho until moving to Dillon eight months ago. She survives. Also surviving are his daughter and son-in-law, Lori and Clint Varnell of Vallecito, Colorado, sister, Charlene Walker of Fort Collins, Colorado, step-daughter, Carrie Shinkle of Coeur d’Alene, Idaho, grandchildren: Bridget, Colton, Cinnamon, Dan, Cash, Candice, Cindi and Casyn Varnell, Jake and Sarah Shinkle, Ryder Shinkle and Kirsten Pham and Grey Shinkle and four great grandchildren Also surviving are his brothers-in-law and sisters-in-law, Bob Earhart and Joan Smith of Salmon, ID, Renne and Rhonda Earhart, Jerry and Ellen Earhart and Beverly Earhart all of Ramsay as well as numerous nieces and nephews. Besides his parents, he is preceded in death by his brother-in-law, Carl Walker, sisters-in-law, Kathy Earhart and Marie (Tootie) Palmer. Cremation has taken place. No public services are planned at this time.

The family of Edward Robert Fenwick created this Life Tributes page to make it easy to share your memories.

Send flowers to the Fenwick family.