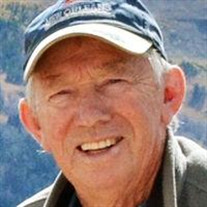 On Saturday, Jan. 13, 2018, our hero tipped his hat one final time and road off into the sunset … Much loved husband, dad, papa, cousin, friend, teacher, coach, and cowboy, Ed Yeo passed away in Goodyear, Arizona, with his wife and daughters by his side. Edward Charles Yeo was born Aug. 3, 1945, to Charles and Edna (Elser) Yeo in Seattle, Washington. As a child, he lived in Bremerton, Washington and Douglas, Arizona before his parents returned the family to their hometown of Sheridan, Montana. The family lived in Sheridan until Ed was in high school. In the middle of his freshman year, the family moved to Butte where Ed quickly overcame the stigma of being the new kid due to his basketball skills. He became a star player for the Bulldogs and during his senior year, he averaged 15 points a game. His favorite shot was from long range and many of his baskets would have been treys, but the arc had yet to be introduced to the game. In 1963, he was the leading scorer for BHS and was selected First Team All-State. He was also a stand-out player for the Butte American Legion Baseball Team. Ed went on to play four years of both basketball and baseball at Rocky Mountain College in Billings. He was named to the Frontier Conference and NAIA District Five basketball teams during his junior and senior years. Ed was later inducted into the Rocky Mountain College Hall of Fame for his individual accomplishments in basketball and for his contributions as a freshman pitcher on the 1964 Frontier Conference Champion Baseball Team. After graduating from Rocky Mountain College with a bachelor’s degree in mathematics in 1967, Ed married his high school sweetheart, Bonnie Ballard, on Aug. 12. The pair celebrated their golden anniversary this past summer with a trip to Seattle for a Neil Diamond concert. Though he was never much of a singer, even Ed enjoyed belting out “Sweet Caroline” along with the crowd. Ed started his teaching and coaching career in Libby, Montana, where he and Bonnie lived for one year before returning to Butte. For the next 34 years, Ed taught math on the fourth floor of Butte High School, often sneaking onto the elevator and claiming he needed a ride due to various ranching injuries. He was an assistant boys’ basketball coach for several years before taking the helm of Butte High’s first girls’ basketball team in 1974. He also coached both the boys’ and girls’ golf teams for 30 years, forging lifelong friendships with players and fellow coaches. In 1974, Ed and Bonnie welcomed daughter, Heather, followed in 1978 with the birth of daughter, Holly. By the time their girls came along, Ed had moved beyond his years as an athlete and devoted his life to finding adventures in the outdoors. Whether it was pedaling down the Oregon coast with Heather on the back of his 10-speed or skiing moguls at Big Sky with Holly in a backpack, he was always on the move. Motorcycles and horses, camping, fishing, and long drives in the old green van … growing up with him was never, ever boring and both his daughters believed that Ed could rope the moon. Ed and Bonnie built their home on the family ranch south of Butte. Before and after school each day, he often had to mend fences, pitch hay, chisel ice off water tanks, or use hair dryers to warm newborn calves. No one would ever say ranch life is easy, but Ed almost seemed to thrive on hard work. Mostly self-taught, he became a rancher, cowboy, and trusted horseman. He dedicated himself to the love of the land. Fortunately, he instilled that love in his daughter Holly, and her husband Russ. Ed was never the kind of man who needed to rely on anyone, but his faith in Russ means the family ranch has been left in very capable hands. In 2002, just one short year after his retirement from teaching, 27 years of diabetes took a toll on Ed’s health. His kidneys began to fail and he was looking at a lifetime of dialysis. However, he and Bonnie discovered they truly were meant for each other. In the search for a donor kidney, Bonnie emerged as the perfect match. Shortly before Thanksgiving that year, Bonnie donated her kidney and Ed got a new lease on life. That new lease on life included being able to watch his grandson, Lathan, and granddaughter, Abby, grow up. Whether he was showing them how to weld, make smoothies, sneak food under the table for the dog, fly model airplanes, take pictures of sunsets, or drive a tractor, one of his greatest joys was sharing his knowledge with his grandkids and making them laugh. Sign up to get each day's obituaries sent to your email inbox For the past several years, Ed and Bonnie enjoyed spending winters in Arizona where they explored the desert in their Razor and made many new friends. Ed was preceded in death by his parents, Charlie and Edna Yeo; his father-in-law and mother-in-law, Jim and Teddy Ballard, and brother-in-law, Jim Ballard. Ed is survived by his wife and perfect match, Bonnie; his daughter, Heather Yeo and her children, Lathan and Abby Ricketts; and his daughter and son-in-law, Holly and Russ Lagerquist. He is also survived by sister-in-law, Cheryl Ballard; nephews, Justin and Jesse Ballard and their families, and cousins by the dozens. There was always a special place in his heart for cousin, Neal Elser, who preceded him in death, and Neal’s family, Alison, Charise, Brad, Chad, and Brent. Until we meet again, happy trails, YO-YO!

On Saturday, Jan. 13, 2018, our hero tipped his hat one final time and road off into the sunset &#8230; Much loved husband, dad, papa, cousin, friend, teacher, coach, and cowboy, Ed Yeo passed away in Goodyear, Arizona, with his wife and daughters... View Obituary & Service Information

The family of Edward C. Yeo created this Life Tributes page to make it easy to share your memories.

Send flowers to the Yeo family.