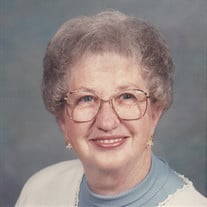 Eileen A. Tourikis made her way to heaven on Monday, Sept. 23, leaving her family and friends with bright, sunny memories, a definition of what true love is all about and a promise to see them all in the future. She was born in Butte on Sept. 25, 1930, the fourth child of Mary and George Berry. "I wasn't much of a kid," she would joke, "but I think I made up for it later on." And indeed she did. Eileen held a great admiration for her older sisters, Marian and Kay, both nurses. She followed in their footsteps, graduating with a nursing degree and eventually heading up the surgery unit at St. James Hospital. The care and safety of her patients always came first. She held fast to the power of her nursing experience long after she retired, settling arguments with an adamant claim to be the winner because "I am a nurse!" She loved her older brother, Bob, who taught her how to ride a bike, even though she was terrible at it. When her little brother, Walt, teased her, she sparred with him as only a big sister could. Eileen marveled at Walt's ability to play various instruments and entertain audiences large or small. She always said she was not a bit musical, but anyone who stood next to her in church knew she had a lovely voice. When Eileen met Jim Tourikis, she knew he was "the one," but decided to lead him in a merry chase "until he could figure it out." They were married on Sept. 15, 1956, in Butte. One of the best parts, she often said of their marriage, was the joyful addition of his big, Greek family to her Irish clan. She and Jim built a happy life together in Butte and took great joy in camping, traveling and spending time with family. Some of their best adventures took place on the road, towing their big camper-trailer to campgrounds where members of both families awaited their arrival. They often traveled with the Good Sam's and took cross-country trips to visit relatives and friends. With no children of their own, Eileen and Jim embraced all of their nieces and nephews with a fierce love, applauding their accomplishments, keeping watch over their growing-up years and rejoicing in the addition of another generation. Each new baby was wrapped in a soft afghan loving created by Eileen. Through the years, she crocheted everything from dolls and toys, holiday wreathes and angels, Easter bunnies and baskets. Yarn and a crochet needle were her constant companions on road trips. "They kept me awake so I could visit with Jim," she told everyone. "Otherwise, I'd be snoozing." In their later years, Jim and Eileen moved to Big Sky Senior Living and enjoyed the camaraderie of many new friends. When Jim passed away, she found solace and great joy with her family, especially during holidays filled with love, laughter and lively music. She was in awe of the younger generations, each of whom played piano and other musical instruments with passion and talent beyond their years. "Listen to that," she would say. "At that age, the only thing I could play was the radio." Eileen's spirit and the joy she brought to all with a blink of her big blue eyes and contagious smile will live on -- a memory of a beautiful life well-lived and well-shared. She was preceded in death by her husband, Jim, her brother and sister-in-law Bob and Dot Berry; sister Sister Marian Berry (SCL): her sister and brother-in-law Kay and Joe McKay: her brother, Walt Berry: her nephew, Dick Berry; her niece, Mary Eileen McKay Knoll; brother-in-law and sister-in-law Bill and Ruth Tourikis; sister-in-law and brother-in-law Phoebe and Clarence DeBorde and sister and brother- in-law Angie and Chet Burke. She is survived by her sister-in-law Carol Berry and her family: Judy and Gary Staudinger; Jack and LeeAnn Berry; Linda and Michael McDaniel; Kathy and Charlie Schermele, Kevin and Cindy Berry and Arlene Berry. Also, her sister-in-law Mabel (Mickey) Ackerman and her family: son, John Ackerman; son Paul Ackerman and his wife Darce Beck, and daughter Dawn Ackerman and her husband Daniel Gallagher. Also surviving are nieces and nephews Joyce Davis; Jim and Mary Ruth Berry; Bob and Sharon McKay; Ken and Sandy McKay; George and Deanna McKay; Jim and Diana McKay; Kary Knoll; Sandy McKay and her husband Larry Holzworth; Diane DeBorde, Bill DeBorde; Jean Tourikis and her husband Steve Heck; Joan and Carey Eisenbarth. The family wishes to thank Big Sky Living and Compassus Hospice for their kind and loving care of Eileen.

Eileen A. Tourikis made her way to heaven on Monday, Sept. 23, leaving her family and friends with bright, sunny memories, a definition of what true love is all about and a promise to see them all in the future. She was born in Butte on Sept.... View Obituary & Service Information

The family of Eileen A. Tourikis created this Life Tributes page to make it easy to share your memories.

Send flowers to the Tourikis family.