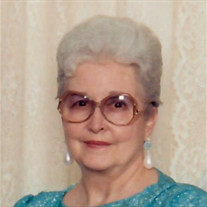 Mrs. Eleanor E. Dawson passed away Friday, March 31, 2017 in Butte, Montana. She was born in Butte on Thursday, November 13, 1924 to John and Estelle (Seymour) Carson and graduated from Butte High School in 1942. Eleanor married Edwin Dawson in Butte on August 29, 1945 and together they raise one daughter and three sons. Eleanor was a stay at home mother, piano teacher, seamstress and caregiver. She enjoyed camping with family and friends, was a member of the Church of Jesus Christ of Latter Day Saints and loved attending church and visiting the Mormon temples. Eleanor is preceded in death by her husband Edwin Dawson who passed away in 2002, her parents, John and Estelle Carson, son John Dawson, son-in-law, Robert Sessions and a granddaughter, Jennifer Smith. She is survived by her daughter, Carol Sessions of Barstow, California, sons, Edward and Mark Dawson both of Butte, grandson, Jon (Kimberly) Sessions of Spanish Fork, Utah, granddaughter, Ashton Dawson-Parks of Missoula, Montana and six great-grandchildren. Memorials may be made to the LDS Church or to a charity of the donor's choice.

The family of Eleanor Estelle Dawson created this Life Tributes page to make it easy to share your memories.

Send flowers to the Dawson family.