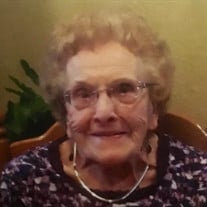 Elsie A. Turk was called home to be with Our Heavenly Father surrounded by her loving family on Thursday, August 17th, after a short illness. She was born on September 28th, 1926 to Emma and Paul Mazzolini. She grew up in Meaderville and attended the Franklin School and Butte High School. She had to quit to gain employment to support her widowed mother and family. She worked various jobs by washing dishes, running the elevator in the Pennsylvania Building, and operating the switchboard for Mountain Bell. She and Fred Turk were married August 24th, 1947, in Saint Helena’s Mission Church in Meaderville. They were married 61 years until Fred’s passing in 2008. They moved to the McQueen addition where their three children, Diane, Debbie, and Freddy were born. The family belonged to Holy Savior Church where she was a member of the Holy Savior Altar Society and the McQueen Fired Department Women’s Auxiliary. Elsie was the matriarch of our family being a devoted wife and mother, grandmother, and great grandmother. She was blessed with 13 grandchildren and 23 great grandchildren. They lovingly called her GiGi. She loved to cook, bake, and garden. Along with making delicious goodies for her family, her specialties were chicken cacciatore, spaghetti, sarma, povitica, and homemade bread. She and her siblings would make over 2,000 homemade ravioli each year for Christmas. She was preceded in death by her brother Ed, brother and sister-in-law Dan and Ann Mazzolini, sister and brothers-in-law Lee and Steve Stayer and Steve Favero, and brothers-in-laws and sister-in-law, Bill and Delores Turk, John, Henry, Ray, and Carl Turk. She is survived by daughter and son-in-law, Diane and John Stenson, daughter Debbie Turk, and son and daughter-in-law Fred and Melissa Turk. She is survived by grandchildren and great grandchildren, Tammy and Samm Cox, (Shane, Reece, and Quinn), John and Heather Stenson, (Zach and Ryan), Kevin and Molly Stenson, (Cael and Jace), Kyle and Emily Stenson, (Mya, Kyler, and Colt), Krissy and Jamey Fellows, (Mason and Dylan), Mike Stenson and fiancé Abby Riordan, (Maddie), Todd Stenson, and Lori Stenson, Amber and Mitch Lee, (Isaac, Adri, Aria, Anouk, Magnus, and Aliviyah), Billy and Stacy McGlynn, (Kathryn and William), Shawn McGlynn, Stefanie and Eric Neer, (Ethan and Baby Thatcher), and Robbie Turk and fiancé, Erin Dickman. Also surviving are special nieces and nephews, Annette and Dick Call and Jim and Gayle Favero, as well as several sister-in-laws and numerous nieces and nephews. We would like to thank the staff at Doctor Siddoway’s office for all the years of care for our mom and dad as well as the loving care provided by The Springs Assisted Living. Memorials may be made to Easter Seals/ Highlands Hospice or to Our Lady of the Rockies.

Elsie A. Turk was called home to be with Our Heavenly Father surrounded by her loving family on Thursday, August 17th, after a short illness. She was born on September 28th, 1926 to Emma and Paul Mazzolini. She grew up in Meaderville and attended... View Obituary & Service Information

The family of Elsie A. Turk created this Life Tributes page to make it easy to share your memories.

Elsie A. Turk was called home to be with Our Heavenly Father...

Send flowers to the Turk family.