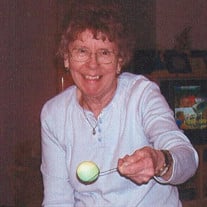 Elva LaVerne Richards One, peacefully went home to Jesus on May 3, 2021 surrounded by loved ones. Born in Helena, Mt April 18, 1930 and adopted by Estelle and Ralph Richards shortly after. She grew up in Butte on Princeton Street and graduated from Butte High in 1948 LaVerne met her husband, Joseph Theodore One, in Butte and later married in Seattle, WA in July, 1950 and subsequently moved back to Butte in late 1951. When her husband Joe (Ted) rejoined the Navy, the family departed on a 30 year adventure. The journey took then up and down the West Coast from San Diego, CA to Bremerton, WA several times, then to Norfolk, VA and on to Honolulu, HI. Retirement extended their adventures working at Grand Teton and Yellowstone National Parks, until returning to Butte 20 + years ago. Upon returning to Butte, LaVerne volunteered at Butte Senior Center, Food Bank and schools reading to the children (she loved being around the little ones)-always wanting to help those in need. She also loved gardening (tons of rhubarb was her specialty), her dogs (her little buddies), baking, going on drives, especially with her great niece Michelle, where they would hunt for special rocks, try to catch sight of a bear or moose, and sometimes just to look at the scenery— Walking was a passion, you could find her at Walmart at least 3-4 times a week walking around the inside perimeter, or sometimes a few laps around the mall. During the lockdown up to a week before she passed you could find her walking what she called “circles” in her home. LaVerne was the first one to be at a family get together, she would always bring a bowl of sweet potato salad, or fruit tray or her special dirt cake Preceded in death by her parents, Estelle and Ralph, her sisters Lois and Judi, her brother Rudy and grandson Jeff Survived by her daughters, Teddi, Lou and Ginny, her brothers Jerry and Tom, grandchildren, great-grandchildren, nieces and nephews and cousins Throughout her entire life LaVerne held an unwavering faith in God, which she shared with those around her—She will be missed, BUT we will see her on the other side.

Elva LaVerne Richards One, peacefully went home to Jesus on May 3, 2021 surrounded by loved ones. Born in Helena, Mt April 18, 1930 and adopted by Estelle and Ralph Richards shortly after. She grew up in Butte on Princeton Street and graduated... View Obituary & Service Information

The family of Elva LaVerne One created this Life Tributes page to make it easy to share your memories.

Elva LaVerne Richards One, peacefully went home to Jesus on May...

Send flowers to the One family.