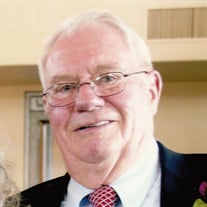 Emmett Patrick “Jug” Cronnelly passed away Tuesday morning at his home in Butte following an extended illness. He was born in Butte July 17, 1933 to Emmett and Mary (Phillips) Cronnelly. He graduated from Boys Central and served his country in the U.S. Navy. Jug was partners in Ashton Printing before going to work at the Montana Standard. When the Standard sold their commercial printing division to Artcraft Printers, Jug went with it and remained with Artcraft Printers until his retirement. Jug married Mary Claire Santon in Butte on September 13, 1954 and together they had 5 children. She passed away on August 4, 2000 and on September 11, 2009 he and Gloria Angelly were married here in Butte. She survives. Also surviving are his daughter and son-in-law, Barb and Dan Fredrickson of Butte, sons and daughters-in-law, Mike and Roberta Cronnelly of Butte, Tim and Julie Cronnelly of Spirit Lake, Idaho, Patrick and Carol Cronnelly of Butte, son Thomas Cronnelly and his fiancée Kristy Jankovsky of Big Fork, grandchildren: Shawn and Ivy Fredrickson, Megan and Ty Schwenk, Mariya and Josh Peck, Jessica and Craig LaDouceur, Austin and Nichole Cronnelly, Sheanna Cronnelly, Caesy Bengtson, Brian Cronnelly, Bob Cronnelly and Colleen Cronnelly. Also surviving are seven great-grandchildren as well as his sisters and brothers-in-law, Nita and Bob Wriston and Donna and Jerry Carlson of Butte. Jug enjoyed fishing, golf, his coffee group at B & S Café and betting on the football games at the Red Zone each week. He treasured the time spent with his sons and grandsons on their trips to the NCAA Tournaments, was a longtime member of St. Ann’s Parish and very proud of his Irish heritage. In lieu of flowers, memorials may be made to Rocky Mountain Hospice or a charity of the donor’s choice. -30-

Emmett Patrick &#8220;Jug&#8221; Cronnelly passed away Tuesday morning at his home in Butte following an extended illness. He was born in Butte July 17, 1933 to Emmett and Mary (Phillips) Cronnelly. He graduated from Boys Central and served... View Obituary & Service Information

The family of Mr. Emmett Patrick Cronnelly created this Life Tributes page to make it easy to share your memories.

Send flowers to the Cronnelly family.