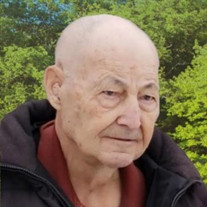 Ernest Melbourne “Trap” Kingsbury passed away peacefully on August 9, 2020 and joined his beloved wife who he sadly lost 3 1/2 short months ago and missed terribly. Ernest was born on March 25, 1930 in Anaconda, and was a long time resident of Butte, Montana. On September 4th, 1949, he married Frances Lunney and in 2019 they celebrated their 70th anniversary at a surprise party with family and friends. As a child he set pins at the bowling alley, sold papers on the street corner, and worked on the railroad. As an adult, he worked at Rosenburg’s Furniture, co-owned and operated Kitto’s Transfer and Storage for 20 years, and was foreman and driver for Biggers Transport. In retirement, he worked for GMC Motors transporting cars. Ernie enjoyed hunting with family in the Powell Mountain and Dempsey Creek areas near Deer Lodge and the upper Big Hole Valley and fishing along the Jefferson and Beaverhead Rivers. He was an avid bowler for many years on three different leagues. In later years, he learned wood carving and enjoyed showing them and gifting them to family and friends. He was so proud of his kids, grandkids, and great-grandkids and was always interested in what they were up to and enjoyed hearing about their grades, jobs, sporting events, and hunting adventures. He took pride in having the nicest, greenest yard in the neighborhood and kept his hedges trimmed perfectly but those darn raspberries never grew. Ernie was preceded in death by his wife, Frances, his parents, Felix and Mary Kingsbury, his children, David Kingsbury, and infant daughter, Tami Kingsbury, brother, Dan Kingsbury, sisters, Mary Helen, Myrtle (Sis), and Johanna and numerous sister and brother in-laws. He will be missed dearly by his children, Robert (Julie) Kingsbury, Carol (Bill) Biggers, Karen (Mike) Danylo and Dani (Matt) Steel. He was blessed with and will be missed by his 10 grandchildren, Dawn (Tom) Malone, Tricia Kingsbury, Thad (Marsha), Trent and Cory (Cassie)Biggers, Kasey, Erin and Anna Steel and Alexander and Nicole Danylo. His 8 great grandchildren, Wesley and Wyatt Biggers, Maddie and Sarah Biggers, Will Kingsbury, Gavin Malone, Timber Biggers and Alexandria Kovnesky brought him so much joy. He is also survived by his favorite sisters, Bessie, Annie, and Violet, brothers Robert (Butch) and Henry (Pete), his sister-in-law, Mary Ellen Moe, and many nieces and nephews. The family would like to thank everyone for their prayers and love during this difficult time. They would also like to thank Dr Yates, her team and Big Sky Senior Living CNA’s and staff for their support and kindness. A joint memorial service for Frances and Ernest will be held at 10:00 am Saturday, August 22nd, at Wayrynen-Richards Funeral Home on 1800 Florence Avenue in Butte with interment at Sunset Memorial Park immediately following. Afterwards, guests are invited to join the family for a luncheon at the Biggers Ranch in Brown’s Gulch. In lieu of flowers, donations in Frances and Ernest’s name may be made to The Lady of the Rockies, Butte Food Bank or the donor’s choice.

Ernest Melbourne &#8220;Trap&#8221; Kingsbury passed away peacefully on August 9, 2020 and joined his beloved wife who he sadly lost 3 1/2 short months ago and missed terribly. Ernest was born on March 25, 1930 in Anaconda, and was a long time... View Obituary & Service Information

The family of Ernest Melbourne Kingsbury created this Life Tributes page to make it easy to share your memories.

Send flowers to the Kingsbury family.